A Successful Bit of Heraldic Sleuthing

One of the readers of this blog recently presented me with an opportunity to do some heraldic sleuthing.  He was trying to get more information about an heraldic stained glass panel that had come to him in the family.  Such heraldic research is often very much of a hit or miss proposition.  I’ve had some good results, and I’ve hit blank walls.  It all depends upon the coat of arms, its provenance, and a host of other factors (including, for example, how familiar the artist is with heraldic blazon and armorial conventions).  This one turned out to be one of the successful ones, and he has graciously allowed me to share it with you. 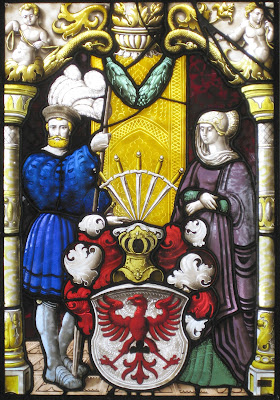 The panel measures 18 x 26 inches (46 x 66 cm).  It was inherited through several generations, but is believed to have been purchased at an auction house in Philadelphia, possibly sometime in the 1940s.  Nothing further of its provenance is known.

I initially replied that it looked German to me -- the type and placement of the helm atop the shield and the style of the man and woman on each side of the shield all show a Germanic influence.  Then I went home and hit the books.

I first checked in the Dictionnaire de Renesse, which sorts the 120,000 coats of arms listed in J.-B. Rietstap's Armorial Général according to the figures and colors on the shield. This narrowed down the search a bit (to a dozen or so German and Dutch names, ignoring for now French names). Then I went to Riestap to see what additional information (crests, etc.) there  might be that would help to focus the search. There were two entries that matched very closely, both for the name Langenstein.

The first one didn't have the little trimount surmounting the eagle's tail, but does have the same crest as in the window. The second had a different crest (a black wing charged with a horizontal white stripe), but did have the trimount.

Looking at Rolland and Rolland’s Illustrations to Rietstap, we have pretty much what I expected based on the blazons.

Some additional research since then in an earlier (1881) edition of Rietstap gives the arms as in the panel quartered with three other coats of arms (quarterly of six, plus an inescutcheon, with the Langenstein arms in the first and sixth quarters), and the crest as in the panel as the first of four crests.  These arms belong to Langenstein de Gondelsheim, Baden (created Counts April 9, 1827).  The arms in the first and sixth quarters (blazoned d’arg. à l’aigle de gu., ch. sur la queue et le ventre d’une colline de trois coupeaux d’azur; Argent, an eagle gules, surmounting the tail and belly a trimount couped azure) are cited in that entry as the armes de la famille suisse de Langenstein, arms of the Swiss family of Langenstein.  Again, there was the illustration from Rolland and Rolland of these arms.

Then, trying to see if there was anything that might give me any additional information about this coat of arms, I searched some of the armorials, particularly Swiss armorials, that I have. I found Langenstein in the Zürich Wappenrolle, which is the oldest original extant roll of arms. (There are older rolls of arms, but they only exist in the form of 15th or 16th century copies. The Zurich roll of arms is the oldest original roll that we know of.)

Specifically regarding the Langenstein arms, Clemmensen, notes: "von Langenstein, from Burg Langenstein near Eigeltingen (Gem. Orsingen, Kr. Stockach, 30 km NW of Konstanz." According to Wikipedia, Eigeltingen is a town in the district of Konstanz in Baden-Württemberg in southwestern Germany, near the border with Switzerland.

I found two drawings of the Langenstein arms from the Zurich roll, one from an 1860 publication (below) containing reproductions of all of the coats of arms contained in it.  (This book can be found on-line at http://tinyurl.com/84scgcw.  Or you can find it by going to Google Books and searching for “Die Wappenrolle von Zürich.”) The Langenstein arms are on the right in this row of shields.

The other illustration is from an on-line publication of the roll which includes a digital photo of the arms from the original roll as well as a modern redrawing of them (http://www.vikinganswerlady.com/ZurichRoll/).

So, given the match of the arms with the trimount (though with a different crest) and nearly identical arms with the same crest, especially now supplemented by the arms and crest of Langenstein of Gondelsheim, I felt very confident in stating that the window is of the arms of one branch or another (because different branches of a family might add or drop relatively minor elements on the shield -- as here, the trimount -- or change the crest) of the family of Swiss/German family of Langenstein. It's clearly an old family and an old coat of arms, since we can find it in the early to mid-1300s in southwestern Germany/northeastern Switzerland.

After sending all of this information to the owner, he replied: “I am retired and want to sit in the living room with a coffee in the morning, and a scotch in the evening, and enjoy the window. Now I can call them the Langenstein’s when I introduce them to visitors. At some point this window will pass along to my son or daughter, and with it can go a history.”

Enjoying it now, and passing it along in the family later.  Isn’t that, to a great degree, what heraldry is all about?

What a great piece of heraldic art!  And I was so grateful to have been able to successfully research it.
Posted by David B. Appleton at 6:00 AM

Email ThisBlogThis!Share to TwitterShare to FacebookShare to Pinterest
Labels: Switzerland