I Knew I’d Seen It Before!

On one of our trips back to Las Vegas last summer, I purchased up a cap from The Venetian Hotel and Casino gift shop with a coat of arms on it.  (Because I have to, you know, buy heraldry when I find some.) 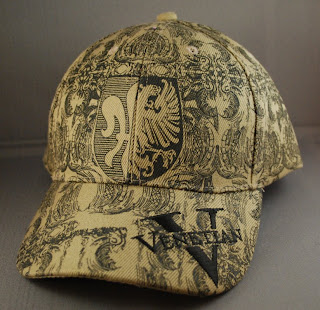 I felt at the time that I had seen those arms before, though I couldn’t remember exactly where.  And, for some reason, I associated them with the German city of Augsburg.

So after we got home and recovered a bit from the travel, I went on-line to the Heraldry of the World website (http://www.ngw.nl/, formerly known as International Civic Heraldry) and looked up the arms of the city of Augsburg.  They were nothing like the arms on the cap. 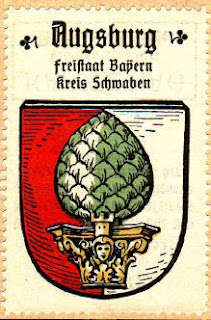 Well, phooey!  Where the heck had I seen the coat of arms on the cap before?  For some reason, possibly because the style of the drawing of the arms reminded me of it, I started leafing through my copy of A.C. Fox-Davies A Complete Guide to Heraldry.  And there on page 429, figure 766, was the “Arms of Loschau or Lexaw, of Augsburg.”  (This coat also appears in the “big Fox-Davies,” the quarto edition of The Art of Heraldry, on page 380, figure 944.) 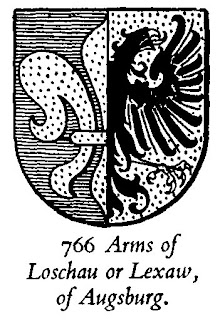 The two versions of the arms, on the cap and in Fox-Davies, are not an exact match.  Both have hatching for Azure (blue) on the dexter half of the shield (the left as you look at it), but there is no hatching for Or (yellow) on the cap, and the cap has a black field and a white or gold eagle on it to sinister (the right as you look at it), while the illustration in Fox-Davies is hatched for Or an eagle sable.  But all of those differences can be explained by the printing process used to create the cap (hence no dots for Or/yellow/gold) and the greater identifiability against the tan ground of the cap for the shield and eagle by reversing the tinctures in the sinister half.

Why had I thought of Augsburg when I saw the arms on the cap?  I have no idea.  But every once in a while, like Han Solo in Star Wars Episode IV, A New Hope, “Sometimes I amaze even myself.”

None of this, of course, explains why The Venetian Hotel and Casino in Las Vegas, Nevada  was selling a cap with a German coat of arms on it.  Some things, I suppose, are just meant to remain mysteries.
Posted by David B. Appleton at 6:00 AM