Having in the past purchased a couple of neckties with coats of arms on them, I continue to receive regular catalogs from the mail order firm Design Toscano.  (The ties that I have bought from them can be found at http://www.designtoscano.com/product/code/SL122.do and http://www.designtoscano.com/product/code/AL105.do.  This is not necessarily a plug for the firm; others have found at least one of the ties available less expensively elsewhere. But they are really nice ties, and I regularly receive good comments when I wear them.)

But I took the time to read through their most recent catalog, and thought I would share a few of the heraldic items in it.  Some are real heraldry; some are clearly fictional.

One of the clearly fictional pieces is the “Count Dracula’s Coat of Arms” Wall Plaque (http://www.designtoscano.com/product/code/CL6100.do). 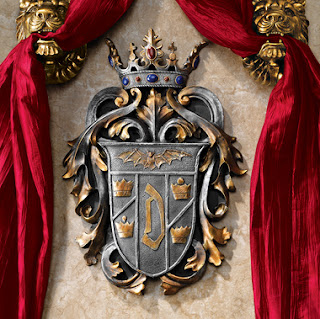 I’d love to know the “historic drawings” from which they say this “family crest of Vlad the Impaler” was allegedly taken, since I’ve seen nothing like it in all of my heraldic researches.

Another coat of arms that is not so fictional, but for whom I have not found a positive attribution, is this stained glass panel (http://www.designtoscano.com/product/code/HD27677.do). 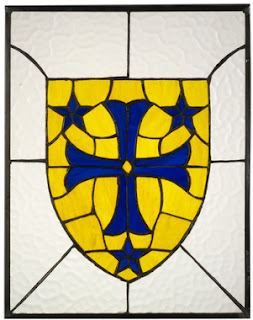 A quick review of Papworth’s Ordinary of British Armorials finds several similar coats of arms belonging to different branches of the Mill and Milne families, but none seem to match exactly.  The closest are Mill, Bonniton, Or a cross moline between three mullets azure and Milne, Edinburgh, Or a lozenge-pierced cross moline between three mullets azure within a bordure nebuly sable.  The first lacks the piercing of the cross which appears in the panel; the second has a bordure which does not appear in the arms on the panel.  Other variants change either the shape of the piercing (square-pierced and oval-pierced) or the color or line of division of the bordure (e.g., invected).

I'll show you some of the other heraldry to be found in their catalog over the next few posts.
Posted by David B. Appleton at 6:00 AM