I'm jumping onto the bandwagon just a little tardily, I realize.  Many of you have probably already read about the big news coming out of Scotland, that Donald Trump is finally receiving a new coat of arms that he can use on his new golf course that he's been trying very hard to build up near Aberdeen.  (For which project he's been receiving a lot of opposition from many of the locals.)  Here's the "coat of arms" that he was using for it ... 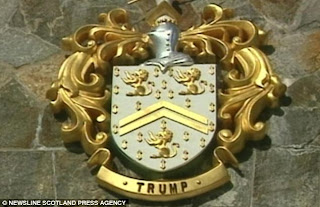 ... until the Court of the Lord Lyon explained to him the realities of trying to us an unregistered heraldic logo in a nation with an heraldic authority, and that, one which could haul him into court for using a self-assumed coat of arms.  Not to mention their ability to deface, remove, chisel down, etc. any such non-authorized arms.

So "The Donald" went through the proper channels and applied for a grant of arms from Lord Lyon King of Arms, and it's about to be unveiled. 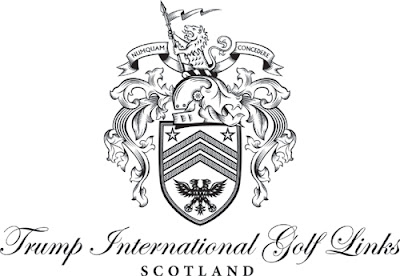 As you can see, there's a crest of a lion rampant (for Scotland), three chevronels, a "double-sided" eagle (they mean two-headed) holding golf balls in its talons, and stars (for the United States of America).  The motto is Numquam concedere, "never give up."  (I have to admit, the design is not nearly as bad as the descriptions in some of the news stories had led me to believe.)
Stories about the new coat of arms can be found at http://www.dailymail.co.uk/news/article-2087966/Donald-Trump-wins-right-use-family-crest-Scottish-heralds-advertise-golf-course.html and http://www.dailyrecord.co.uk/news/scottish-news/2012/01/18/donald-trump-comes-up-with-official-coat-of-arms-to-go-with-750m-golf-resort-86908-23705556/ and http://www.deadlinenews.co.uk/2012/01/17/donald-trump-at-last-awarded-the-scottish-coat-of-arms/ There are, no doubt, more stories about this on the websites of any number of newspapers.
Additionally, folks have been making proposals for what the new coat of arms perhaps should look like.  Here's a couple of examples. 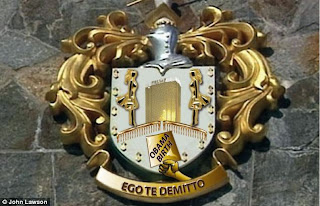 The motto for this one is Latin for "You're fired." 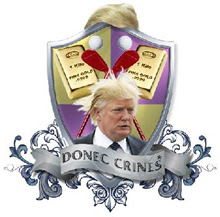 And the motto here is Latin for "Keep your hair on."
Posted by David B. Appleton at 8:56 PM