The (Almost) Arms of the United States

J.L. Bell has a blog that I drop by and read regularly entitled Boston 1775, which covers a myriad of topics relating to the beginnings of the Revolutionary War, mostly – as you may have guessed from the title of the blog – in Massachusetts. 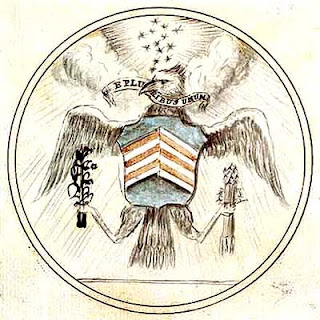 This picture is of a sketch by Charles Thomson of how he pictured the Great Seal of the United States in June 1782.  (The eagle with the shield is on the obverse of the Great Seal.)  In his written proposal to the Continental Congress, Thomson suggested for the seal:

On a field Chevrons composed of seven pieces on one side & six on the other, joined together at the top in such wise that each of the six bears against or is supported by & supports two of the opposite side the pieces of the chevrons on each side alternate red & white. The shield born on the breast of an American Eagle on the wing & rising proper. In the dexter talon of the Eagle an Olive branch & in the sinister a bundle of Arrows. Over the head of the Eagle a Constellation of Stars surrounded with bright rays and at a little distance clouds.

So what we might have ended up with, instead of the Paly of thirteen argent a gules, a chief azure (that so many people even today can’t depict correctly – see my posts of October 13, 2011 (http://blog.appletonstudios.com/2011/10/final-bit-of-heraldry-in-raleigh-north.html) and April 23, 2009 (http://blog.appletonstudios.com/2009/04/blazoning-arms-of-united-states.html) for examples), we could have ended up with a (nearly unblazonable!) chevron of six stripes to dexter red and white and seven stripes  to sinister white and red on a blue field.

The full article can be found on-line at: http://boston1775.blogspot.com/2011/11/united-states-eagle-as-it-first.html.

The article also contains a link to another website, http://www.greatseal.com/, that gives the Great Seal’s history, symbolism, and design process, as well as some of the myths and misinformation about it, which you might find of some interest.
Posted by David B. Appleton at 6:00 AM