A Final Bit of Heraldry in Raleigh, North Carolina 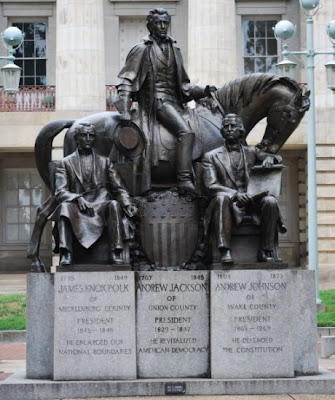 Even if we go ahead and assume that they are not using the usual Petra Sancta hatching for red (vertical lines), so that these here are the expected seven white stripes and six red ones (the official blazon is Paly of thirteen argent and gules), the arms of the United States do not have stars on the chief. In the example here, there are thirteen stars, representing the thirteen colonies which broke away from England and later formed the United States. 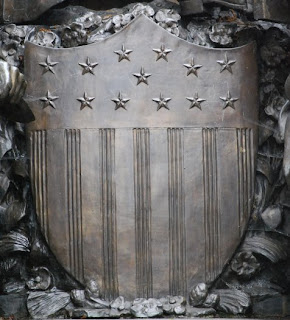 The addition of stars to the chief on the arms of the U.S. is, alas, a common error. For that matter, I have also found a number of depictions of the U.S. arms with seven red stripes and six white ones. Both of these errors mimic the national flag, but are not really a part of the coat of arms. So here we have a case where familiarity doesn’t breed contempt, exactly, but it does become the basis for error.
Posted by David B. Appleton at 6:00 AM