Well, not especially new, but a recent (November 20, 2011) article in The Telegraph noted that singer Tom Jones (shown below) acquired a coat of arms a little while ago. 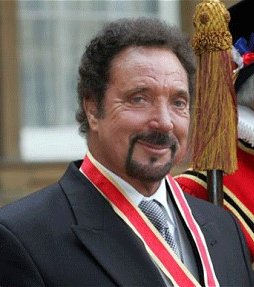 The article by Richard Eden begins:


For a member of the aristocracy, it’s not unusual to have a coat of arms. For the son of a coal miner who grew up in a terrace house in Pontypridd, it is, however, something to sing about.

The coat of arms, described briefly (but not blazoned) by David White, Somerset Herald, makes them to be canting arms (where the figures on the shield are a pun on the bearer's surname).  In this case, the cant is on the singer's real surname of Woodward, and consist of a key (with its "wards") between two trees (for the "wood").  The crest is a red demi-dragon holding an inverted leek, thus referring to his Welsh roots.

There is what has become something of a tradition of ladies throwing their panties onto the stage where he performs, a tradition taken to excess once by comedienne Dawn French, who when meeting the singer, took off pair after pair after pair of panties (which she had on over her clothes) to give to him.

The full article in The Telegraph can be found on-line at: http://www.telegraph.co.uk/news/celebritynews/8901318/Singer-Sir-Tom-Jones-is-granted-his-own-coat-of-arms.html
Posted by David B. Appleton at 6:00 AM