Blazoning the Arms of the United States 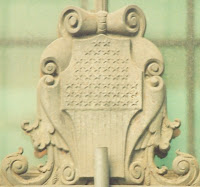 It’s long been of interest to me that there is a bit of a controversy about the "correct" blazon of the arms of the United States of America. (This in addition to the confusion that sometimes arises because the arms themselves have no stars upon them. In spite of this, you often see representations of the arms that have stars on the chief. Witness the example here, which is literally "carved in stone", or to be more accurate, cast in concrete.)

The "official" blazon of the arms is Paly of thirteen argent and gules, a chief azure. There are those who have taken umbrage with this blazon, because in the English tradition of blazon for something to be "paly" (or "barry", or "bendy", etc.), there must be an even number of pieces – usually six or eight, sometimes more, occasionally less, but always of an even number. These folks would then have you know that if there are an odd number of pieces (seven, nine, thirteen, etc.), then the field in our example here should be blazoned, "Argent, six pallets gules".
I have a problem with this proposed blazon, because while a "paly" field would require the different pieces of the field to be equal in width, no such requirement exists for a field with pallets upon it. To see what I mean, take a look at the emblazons below. The one on the left is the arms of the United States as officially blazoned, Paly of thirteen argent and gules, a chief azure. The one on the right is an entirely legitimate drawing from a blazon of Argent, six pallets gules, a chief azure. In the second one, the red pallets are clearly not equal in width to the argent portions of the field. In the first one, the paly portions of the field, white and red, are equal, as the original thirteen states (and the additional 37 since then) were, and are supposed to be, equal. 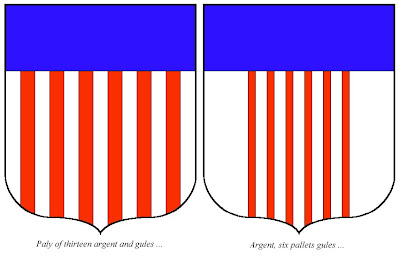 Further, I would note that requiring a "paly" (or "barry", or "bendy", etc.) field to be of an even number of pieces is an English conceit and not necessarily a more general heraldic rule. "Foreigners make no matter, neither in Paly, Barry, nor Bendy, whether the pieces be even or odd, provided they be of an equal latitude; and therefore amongst them you as often meet with Paly, Barry, and Bendy of 7 and 9, as 8 and 10." (John Gibbon, Introductio ad Latinum Blasoniam, 1682, p. 5)
We as a nation threw off the yoke of English rule well over 200 years ago. Why then, flying in the face of the underlying logic of the design of the arms, do some heraldry enthusiasts among us continue to insist on using an English rule to blazon our national coat of arms? Especially when such a blazon would create an inequality between the stripes of white and red, as symbolic of the original thirteen equal states, which inequality the originators of the arms did not intend? If we, too, are "foreigners", that is to say, no longer subjects of England and by extension no longer subject to its rules for the blazoning of arms, then why shouldn’t we also "make no matter ... in Paly ... whether the pieces be even or odd, provided they be of an equal latitude"? Especially when that "equal latitude" was exactly what the designers of the arms were trying to achieve.
Posted by David B. Appleton at 12:20 PM