Over at Spoonfed there’s a recent (November 11, 2011) review of one man’s (Tom Jeffreys) take on an exhibition at the British Library, Royal Manuscripts - The Genius of Illumination, on display now through March 13, 2012. It’s a good review, and makes me want to go and check out what I can of the collection.

In one paragraph - and this is where we’re getting close to the topic of this blog, heraldry - he discusses the fact that these manuscripts incorporate a lot of different conceptual threads, one of which was kingliness, which itself was tied to two things: “God, and lineage.” And what was often used to help tie a ruler to some of the great figures of history? Why, heraldry, of course. “[B]y embedding a monarch's coat of arms into Biblical stories, the aim is to reinforce his authority – an authority which often rested not simply on military might but on precarious genealogical arguments.” 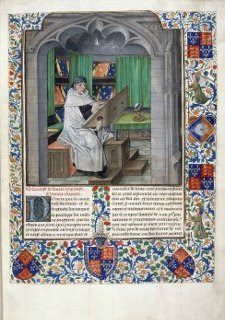 (Umm, let me guess; the manuscript page above belonged to the King of England, right? Because his coat of arms and other insignia appears on the page how many times? To quote an old Mel Brooks line: “It’s good to be the king.”)

It’s a nice overview, about a great collection of manuscripts. You can read the entire review on-line at: http://www.spoonfed.co.uk/spooners/tom-699/royal-manuscripts-at-the-british-library-6151/