... you can find heraldry everywhere!

In this particular case, I was attending a ceremony over in Fort Worth, Texas, and found the following bit of military heraldry on a pickup truck in the parking lot. 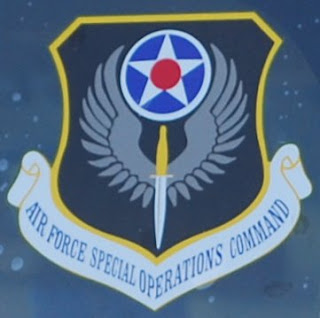 I was glad I had my camera with me!

These are the arms of the Air Force Special Operations Command, containing a pair of wings surmounted by a dagger, point to base (what the English heralds would call "reversed" but what American heralds think of as "inverted"), and in chief the old 1930s and very early 1940s wing markings of what was then the United States Army Air Force.  (Later they dropped the red roundel in the center, and eventually added a white horizontal bar behind the roundel, bordered in blue.)
Posted by David B. Appleton at 6:00 AM

Email ThisBlogThis!Share to TwitterShare to FacebookShare to Pinterest
Labels: military