Oh, dear.  I've often said that "you can find heraldry everywhere," but "everywhere" really doesn't, to my mind, involve extraterrestrials or .  Not everyone, apparently, would limit the search in that way.

In an article in The Sun on June 22, 2011 (http://www.thesun.co.uk/sol/homepage/news/3652403/Coat-of-arms-crops-up-in-field.html), a quasi-heraldic crop circle that some say resembles an ancient coat of arms appeared overnight in a field. The crop circle was photographed at West Woods, near Marlborough, Wiltshire, by crop circle expert Lucy Pringle.  I am not at all certain where Ms. Pringle's expertise comes from, or even which side of the "crop circles are made by extraterrestrials" or "crop circles are made by human hoaxers" she falls.  (There are some nice articles about crop circles over at the Skeptical Inquirer, including this one: http://www.csicop.org/si/show/circular_reasoning_the_mystery_of_crop_circles_and_their_orbs_of_light/) 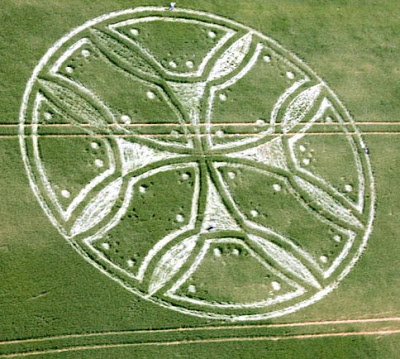 Ms. Pringle, of Petersfield, Hants, said: "This interesting design measures approximately 90 feet in diameter. It has a resemblance to a Cross Clechee with arms spreading out gradually from the centre. This cross denotes knowledge, guardianship, and dominion."  (Okay, now I know she's getting off into the realm of fiction.  As one source has noted, "Scholars vary in the their opinions concerning the reliability of any ‘commonly held’ historic meanings for coats of arms and crests." In my own researches, I have found varied, sometimes mutually exclusive, "meanings" for a charge.  I mean, how can one charge mean both "perseverance" and "sloth" at the same time?  The owner of the coat of arms works very hard at being lazy? No.  In fact, there are no generally accepted meanings of the tinctures and charges in heraldry.)

Ms. Pringle goes on to state that "Similar to the Cross Toulouse, it is assumed that the bearer of this cross was a crusader from the area of Toulouse."  (It is "assumed," but on what basis?  I could assume - I don't, but I could - that it was made by extraterrestrial Knights Templar from a planet orbiting the star Betelgeuse, but I have absolutely no evidence with which to support that assumption. So what then makes her assumption any more likely than the one I posit as an example?) 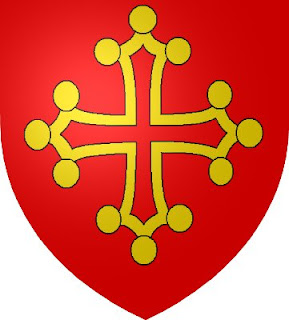