In my job as a legal secretary (I mean, you don't think I can pay my mortgage with what I make as an academic herald, now, do you?) I sometimes have letters come across my desk that have a letterhead with a coat of arms or heraldic-type logo on them.  One that stopped for a moment on my desk a little while ago was a letter from a small college out in the east Texas town of Marshall.  (It's about 150 miles to the east of where I work in Dallas, just a little this side of the Louisiana border.)

Wiley College, as its website notes, was founded in 1873 by the Freedman's Aid Society of the Methodist Episcopal Church to provide education to the "newly freed men" and preparing them for a new life. The College is now affiliated with the United Methodist Church.  Though open to everyone, it has served African-Americans and other minorities.  Initially, Wiley College's focus was mainly on training teachers for black elementary and secondary schools. It has since grown from a vocational college to an institution that awards an associate's degree and bachelor's degrees in 17 disciplines.

Wiley College's 1935 Debate Team was the subject of the 2007 movie, The Great Debaters, starring Denzel Washington and Forrest Whittaker. 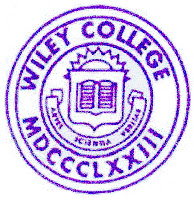 Wiley College uses the above seal, with a coat of arms as its centerpiece.  The arms are not atypical for academic heraldry, featuring an open book on the shield, with a sun rising from behind the shield substituting for a crest.  I can't quite make out the motto on the scroll beneath the shield - all of the images I have been able to find of the seal are pretty small - but it looks like "Artes Sciencia" (Arts, Science), but I cannot quite make out the third word.  The date in the surrounding circle is, of course, the date of the foundation of the College, 1873.  It's not a bad use of a coat of arms, and is far better than some academic healdry that I've seen in its simplicity and clear symbolism.
Posted by David B. Appleton at 6:00 AM