Heraldry Seen on a Recent Trip

I suppose a more accurate title would be "Heraldry seen while I was on a recent trip," since it was Jo Ann and I who were on the trip, and not the heraldry.  But be that as it may ...

We had gone to spend a few days in Las Vegas, Nevada,* for attend my father's 85th birthday dinner and party.  (My parents have lived in southern Nevada since 1963 and in Las Vegas proper since 1966, so they've been there for a while.)  Since we flew in on a Tuesday and out again on that Friday, with finalizing the preparations for the dinner and party and visiting with all the family that came in for the occasion and all that goes with that, there wasn't a lot of time for sightseeing or cruising around looking for heraldry.

We did, however, run across this little sign containing what might loosely be termed a coat of arms for SouthWest Air Conditioning, Inc. as we were driving down one of the major roads in Vegas (double-checking, it was South Valley View Boulevard).  (I will apologize for the quality of the photo, but considering it was taken at a distance through the windscreen of a moving car, the fact that Jo Ann was able to capture it at all I find remarkable.  I love having a wife who is willing to go out of her way to try to get pictures of heraldry and coats of arms-like logos for me!) 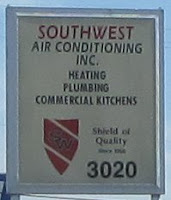 I suppose it would be blazoned something along the lines of: Gules the letters S and W conjoined in bend sable fimbriated between two bendlets (or ribbands) argent.  I did enjoy their tie-in to heraldry and what it might stand for in the phrase "Shield of Quality" on the sign.

Once again, though, it just goes to show you, that you can find heraldry (and pseudo-heraldry) everywhere!


* As Jo Ann often likes to note to her co-workers when they get excited when she tells them that she's going on a trip to Las Vegas, "No, we're not going to the fun Vegas; we're going to the dusty little desert town Vegas where the ordinary people live who provide all of the support services for the fun Vegas."
Posted by David B. Appleton at 6:00 AM