An Example, of a Kind

Every once in a while in my researches I’ll run across an example of particularly poor heraldic design. Many times when I do, I end up asking myself that old question, “Why is there such a difference between something you will always remember, and something you will never forget?” (That, and "What were they thinking?!")

In this unforgettable instance, the heraldry in question was the coat of arms for West Virginia University’s first residential college Lincoln Hall, which opened back in 2006. The full article regarding the Hall, its mission and its coat of arms can be found on-line at: http://www.newswise.com/articles/view/522809?print-article 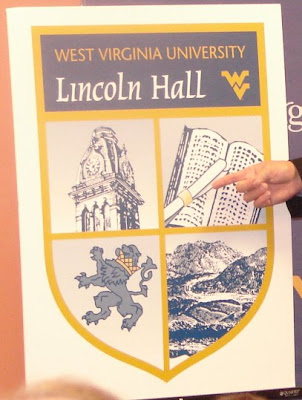 My attempt at blazoning this coat of arms resulted in this: Quarterly Argent and Argent; 1st, The tower of West Virginia University’s Woodburn Hall; 2nd, An open book almost bendwise sinister surmounted by a closed scroll bendwise sinister; 3rd, A lion rampant Gray gorged of a coronet Or; 4th, A landscape consisting of some mountains, a river, and some wooded hills; all surmounted by a fillet cross and within a bordurelet Or, on a chief Gray in chief the words West Virginia University Or, in base the words Lincoln Hall Argent and the University’s WV logo Or, within a bordurelet Or.

“Members of the residential college will develop a sense of belonging by participating in a wide range of social and cultural enrichment activities " and identifying with a rich array of traditions, ranging from college clubs and student hall council to college teas and a coat of arms, which was unveiled during Wednesday's event. The coat of arms was developed by resident faculty leaders with input from other WVU administrators.”

The professor introducing the coat of arms “noted that the crest features the well-known image of the clock tower that graces the top of one of WVU's most recognized and historic campus buildings, Woodburn Hall; a book and diploma to reflect a student's academic commitment and goal of graduating; hills and valleys to represent West Virginia's landscape; and a lion from the [U.S. President Abraham] Lincoln family crest.”

I haven’t found anywhere that the family of President Lincoln had or used a coat of arms. Burke’s General Armory has nine different coats of arms for Lincoln/Lincolne, one of which is close to the third quarter here: Argent a lion rampant sable ducally gorged or (for Lincolne, but no county or other identifying information is given).

Oh, well, I suppose I should be grateful that they didn’t call a coat of arms a “crest.” Oh, wait. They did. Twice!  (Sound of head banging against keyboard.)
Posted by David B. Appleton at 6:00 AM