Uproar in Ghana Over Abuse Of Coat Of Arms

In some recent news stories (including this one from June 1, 2011 at
http://www.ghana.gov.gh/index.php?option=com_content&view=article&id=6076:mps-express-concern-over-abuse-of-coat-of-arms&catid=96:top-headlines) members of Ghana’s Parliament have expressed concern over the misuse of the country's coat of arms and called on the government to take action to safeguard the sanctity of the national emblem.

The MPs were contributing to the ''wanton abuse of Ghana’s Coat of Arms'' said the MP for Amenfi East. In his statement, he described the coat of arms as a ''symbol of precious official and executive value and that nothing should be done to cheapen its importance as a special national heraldic device.'' He noted that although the Flag and Arms Protection Act makes it an offense to use the national arms without license, one often sees the national coat of arms on vehicles and motorbikes as well as T-shirts in addition to other items sold on the internet. He called on the security agencies to stop this illegal use of the country’s coat of arms.

The MP for Sekondi described the coat of arms as an embodiment of the nation which should not be used carelessly and called on the Minister for Justice and Attorney General and the Minister for Interior to take action and restrict its use. 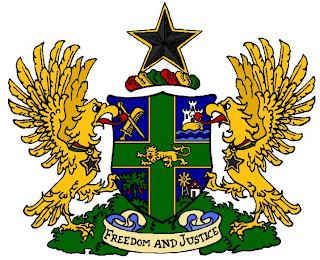 The coat of arms of Ghana, designed by Amon Kotei, was introduced on March 4, 1957 by Queen Elizabeth II.

And in a related article from June 2 (on-line at: http://www.ghanaweb.com/GhanaHomePage/NewsArchive/artikel.php?ID=209544):

A number of residents in the Brong-Ahafo region have added their voices to the call by MPs to regulate the use of state emblems and the Ghana coat of arms. Only the President and a few state institutions as well as some personalities have the authority to use these emblems but many people are using the national emblems without any right to do so. The residents said that the appropriate authorities should immediately begin an educational campaign to educate the public to appreciate the appropriate use of national emblems and the coat of arms. They argue that just as no one can legitimately wear a police uniform or cassock unless they have satisfied certain requirements, no one should use the national coat of arms without approval.
Posted by David B. Appleton at 7:38 PM

Email ThisBlogThis!Share to TwitterShare to FacebookShare to Pinterest
Labels: Ghana