In a brief story posted July 29, 2011 on the Life magazine pictures of the day site, there was notice that Bob Bradley had been fired as the head coach of American men's national soccer team. (Bradley had taken the team to the round of 16 at the 2010 World Cup, not bad for a nation that really doesn't play "futbol" very much.) Prominent on his jacket in the photo there, http://www.life.com/image/ugc1266191/in-carousel/21231, was the coat of arms-like logo of the soccer team; something that I, not being very much of a sports fan, hadn’t seen before. 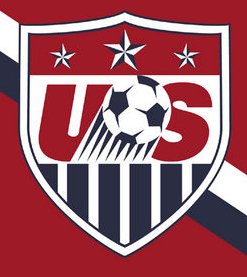 Even though the tinctures have been rearranged (blue and white stripes where the national arms of the United States are white and red, and with red in chief instead of a blue chief), the logo certainly does say “USA” pretty definitively, even without the prominent “US” and the soccer ball on the fess.

My attempt at a blazon (a verbal description of a coat of arms, which would allow someone else to reproduce the image) would be: Per fess Gules and paly of eleven Azure and Argent, on a fess Argent a soccer ball soaring toward sinister chief Proper issuing towards dexter base eight piles Azure between the letters U and S Gules, in chief three mullets gyronny of ten Azure and Argent.

Well, okay then. I’m guessing, given the number of words that I had to use, that either I am not very good at blazoning (a condition I don’t think is a likely possibility, even though I do say so myself), or the logo here is not very good heraldry (more likely). But most of you probably already knew that.
Posted by David B. Appleton at 2:48 PM