This being, now, the 4th of July, the day on which the United States celebrates its declaration of independence from Great Britain, I ran across an item a little while ago that I thought had a (tenuous) relationship to the Second Amended of the Constitution of the United States.

That amendments says, in part: "A well regulated militia being necessary to the security of a free State, the right of the People to keep and bear arms shall not be infringed."  The two words that we keep hearing in any discussion of this amendment are "bear arms."

Which, English being the kind of language that it is, sounds just like "bare arms."  And that leads us to this photograph of a man who bears arms on his bare arm. 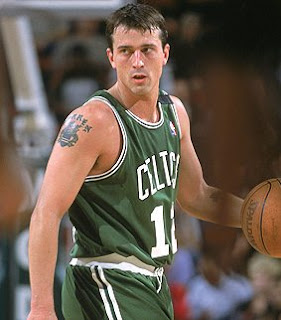 There was an article about the ups and downs in the life of Chris Herren, a phenomenal basketball player but one who, at least for a while, let drug use take over his life.  (You can read the whole article at http://sports.espn.go.com/boston/columns/story?columnist=barboza_scott&id=6584856)  But the part that caught my attention was the paragraph that talked a little about his general background in Fall River, Massachusetts where he grew up, and "the tattoo of his family's coat of arms" that he had done on his right arm.

Now, I'm not going to get into whether or not it's really his family's coat of arms, or something that belongs to someone who simply shares a surname with him.  But you have to admire someone who "bears arms" on his "bare arm," don't you?  And isn't that an appropriate topic for a nation's "independence day"?
Posted by David B. Appleton at 6:00 AM