Heraldry (and History) for Sale

An article over at CountryLife.co.uk notes the offering for sale of one of Scotland’s greatest country houses, Blair Castle in Ayrshire (not to be confused with Blair Castle in Perthshire). The house is “Scotland's oldest continually inhabited mansion house lived in by the same family” and “the bulk of its historic contents are also being offered by separate negotiation.” So, here’s your chance to buy some history, and some heraldry: “The splendid plaster ceiling was added in the mid-1800s using the heraldic motifs of the Hamilton and Blair crest,” not to mention the architectural heraldic commemoration of when “Roger [de Blair] married Marie Muir, the sister of [King] David II, and their joint coat of arms can be seen above the door of the old tower, which dates from 1105.” 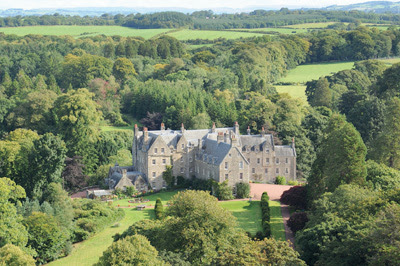 I can’t afford it on my salary, but perhaps you might. The asking price is something over £8 million for this “wonderfully private but accessible” Lowland estate, with its 260 acres of park and woodland, 1,000 acres of farmland, four farmhouses and seven cottages, all only 25 miles from Glasgow. Oh, yeah, and its heraldry is included.

The complete article about the history and placement for sale of this estate can be found at: http://www.countrylife.co.uk/property_news/article/526197/For-sale-One-of-Scotland-s-greatest-country-houses.html
Posted by David B. Appleton at 6:00 AM