Some Great Heraldry in Stuttgart, Germany

In central Stuttgart, Germany, one of the most impressive buildings is the Neues Schloss, the New Castle, badly damaged during WWII but rebuilt and now the home of the ministries of the Baden-Württemberg state government (and the site of the opening ceremonies for this year’s International Congress of Genealogical and Heraldic Sciences). More information about the building, along with a nice aerial photograph of it, can be found on-line at http://www.stuttgart-tourist.de/ENG/leisure/neuesschloss.htm

Even more impressive, at least to me as an academic herald, flanking each side of the main gate in front of the Neues Schloss are representations of the arms of the old Kingdom of Württemberg (of which Stuttgart was the traditional capital) used until 1918 (Per pale, or three stags attires in pale sable, and or three lions passant in pale sable), with each shield matched with one of the two supporters of the arms - a lion sable (dexter) and a stag or (sinister). (The arms of the newer state of Baden-Württemberg have a gold field with the three black lions and with a stag and a griffin as supporters.)

It is one of the best displays of heraldry that I think I have ever seen.  I found myself trying to walk past it over and over again, just to see and enjoy it. 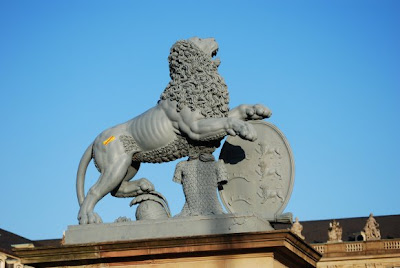 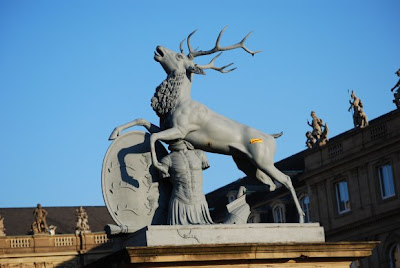 And the depictions are completely 3-D, “in the round.” Here’s a picture of the back side of the stag supporter, showing the decoration and arm straps on the back of the shield. 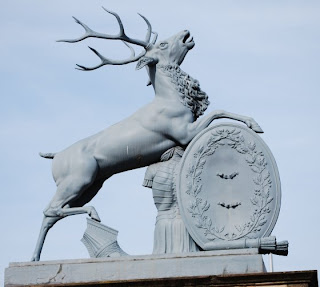