Also on the large iron gate structure at the corner of the Chicago campus of Northwestern University, which I noted in my last post, flanking the seal of the school over the central part, are two more coats of arms. 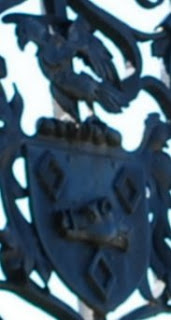 One, the one to dexter of the seal, according to Papworth’s Ordinary of British Armorials is the arms of Kinloch, Azure a boar’s head erased between three mascles or. There is a crest issuing from a torse which ensigns the shield. It appears to be an eagle rising, which Fairbairn’s Crests assigns to Kinloch or Kinlock. 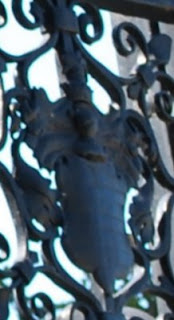 The other, the one on the sinister side of the seal, is a coat that may Barry of six or eight, or which might be [Field] four bars. Alas, there are two and a half pages of arms “barry of six” in Papworth (and an additional page and half of “barry of eight” up through “barry unnumbered”, and many pages of three or more bars, making identification of the coat of arms here, without an indication of its tinctures, more problematical.

There is a helm and crest atop the shield, but the photograph is not clear enough to be able to make out what the crest is.

Here, too, searches on-line turned up no additional information that might shed light on whose arms were displayed on these shields, or what relationship the individuals might have with the University. Yet for all the unanswered questions of whose arms these are and why they are there, they are yet another example demonstrating the fact that you can find heraldry anywhere! Or everywhere.
Posted by David B. Appleton at 6:00 AM