Deep in the Heart of Texas

It's always nice when I can learn something new about the place where I live and work.  In this case, I was checking out recent postings on one of the heraldry blogs I visit regularly (you can find a listing of most of these under "Other Blogs of Heraldic Interest" on the left-hand side of this page), the Blog de Heráldica.  His post for November 28 (http://blogdeheraldica.blogspot.com/2010/11/diocesis-de-dallas.html) discussed the coat of arms of the Roman Catholic Diocese of Dallas. 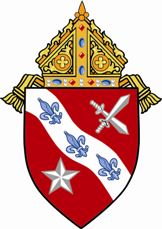 What was very nice was that he also included a link to the Diocese's website, specifically, to a page there that discusses the rationale for the symbols the coat of arms contains.  That page can be found at: http://www.cathdal.org/pages/Coat_of_Arms

I didn't know for certain that the Diocese here in Dallas had a coat of arms, though I certainly suspected that they would have one.  And it's really great to be able to not only see it, but to learn of the reasoning behind the charges on the shield.  (Too often we have no idea why a particular coat of arms bears this charge or that one.  And all those books and websites that purport to tell you the "meanings" of the colors and lines of division and charges are just so much hooey.  If I may be forgiven using a term other than the usual name for such stuff that is used in Texas.  I try to keep this a family-friendly blog, but the word I would use instead of hooey consists of two syllables, the first one beginning with a "b" and the second one beginning with a "s".)

Be that as it may, they say you should learn at least one new thing every day.  I've learned mine for today.  Can I go home now?
Posted by David B. Appleton at 12:28 PM