On the facade of the New Castle in Stuttgart is a remarkably complex coat of arms, carved in deep relief and surrounded by all sorts of statuary. It’s a beautiful piece of work, despite the high contrast of the repairs which have been done to it (presumably to repair damage done by bombs during WWII), which detract a little bit from it. (The building itself was completely gutted by bombing, as you can see in the picture here http://en.wikipedia.org/wiki/File:Neues_Schloss_Stuttgart_(1956).jpg taken in 1956 shortly before restoration work began, but much of the facade - including the coat of arms over the central entrance and many of the statues - remained with less damage.)

On an inescutcheon which is ensigned with a royal crown is the arms of the Kingdom of Württemberg, Or three stags attires in pale sable impaled by Or three lions passant in pale sable, another depiction of which I discussed in my last post with the lion and stag supporters on the gate before the central courtyard of the New Castle. 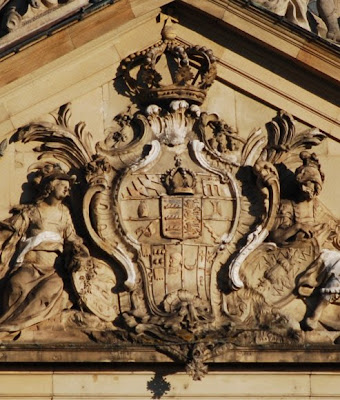 For the main shield, I’m guessing that the first quarter is supposed to be a depiction of the arms of Bavaria and not a bend sinister fusilly (note the “extra” fusil part in sinister base, even though there are no such extras in dexter chief). The remainder of the shield contains a lot of different charges and symbols (a gonfanon, a bishop’s mitre, a pennant or flag, two fish haurient back to back, a ragged staff in bend/a bend raguly, the bust of a man wearing a cap, a crescent), and includes two quarters (dexter base and sinister base) which appear to be quartered themselves.

The medal hanging from below the shield bears a strong resemblance to be that of the Pour le Mérite, the "Blue Max."  It is a Maltese cross with eagles displayed between the arms of the cross; but the medal here has a roundel in the center, while the Blue Max has no such roundel but does have a crowned "F" (for Friedrich the Great) and the words "Pour le Mérite" on the arms of the cross.

I always stand in awe at both the amount of work and the quality of the work that goes into the carving of such a coat of arms. It is a beautifully rendered piece of work.
Posted by David B. Appleton at 6:00 AM