A Great Place for Heraldry, Part 3

Today we’re going to finish up our “tour” of the façade of the Klas Restaurant in Cicero, Illinois. 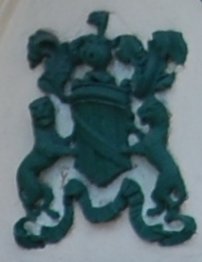 Tucked away into a recess on the ground floor was this little achievement of arms in what I believe is cast metal which has been painted (probably several times), consisting of a coat of arms (?, a bend ?), a coronet (of a baron, I believe), one of those helms that it would have been impossible to actually put over your head but which were so popular in the 18th and 19th Centuries, a crest (it’s hard to make out; it might be an axe of some sort, a head of some sort, or ostrich plumes) and mantling, and a couple of supporters (I’m thinking catamounts rampant guardant) floating just above what would normally be the motto scroll (though I don’t make out any lettering on it).

And finally, there are coats of arms in some of the stained glass windows at the restaurant. Of course, they’ve been installed so as to be seen to best advantage from the inside, and so identifying them from a photo of the outside taken while just passing by, but it’s plain that it is a coat of arms of some sort.
The next time I’m in Chicago, I’m going to have to stop in and see what other armory they have on display there. Oh, yeah, and have dinner, too!
Posted by David B. Appleton at 6:00 AM