The other armorial memorial window in St. Luke’s is for: 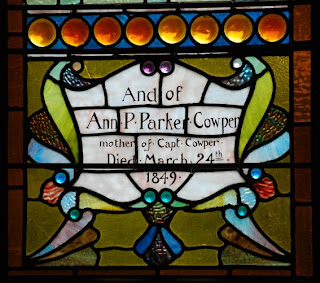 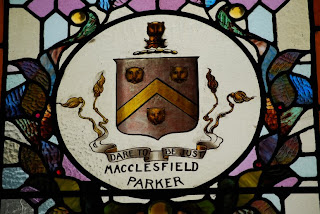 Arms: Gules[?], a chevron between three leopard’s faces or.
Crest: A leopard’s head erased gorged of a coronet or.
Motto: Dare to be just
Names underneath: Macclesfield
Parker

Under “Parker (Earl of Macclesfield)” it says “Same Arms and Crest” as Parker of Norton Lee’s and Parker of Park Hall.

Parker (Park Hall, co. Stafford; a younger branch of the Norton Lees family and the senior line of the noble house of Macclesfield). Same Arms and Crest.

It is possible that the coronet on the crest is supposed to be gules instead of or, but even on close inspection it’s hard to tell. It looks to me like it’s the same color and shading as the leopard’s head.

Ann Pierce Parker Cowper (the only daughter of Col. Josiah Parker, 1751-1810. He was in 1788, a Delegate to the Constitutional Convention) does not appear to be buried here, either. There is a stone to her memory at the Parker cemetery located on the old Macclesfield Farm about three miles east of Smithfield, but she is apparently not buried there, either.
The words of the memorial window notwithstanding, Ann P. Parker Cowper seems to be best-known for her petition in 1816 to the General Assembly of Virginia seeking a divorce from her abusive husband.
Posted by David B. Appleton at 6:00 AM