The next stop in our tour of Hollywood Cemetery in Richmond, Virginia, is the grave of James Branch Cabell (1879-1958). 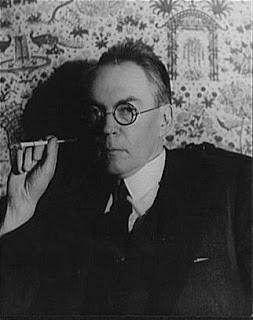 One of the earliest writers of fantasy, or speculative, fiction, Cabell (pronounced CAB-bell) attacked American orthodoxies and institutions in his best-known novel, Jurgen (1919), a story full of sexual symbolism. His other works, some fifty in all, and many of which are allegories set in an imaginary medieval province, include The Cream of the Jest (1917) and The High Place (1923). Though much praised in the 1920s, his mannered style and skeptical view of human experience fell out of favor with the reading public, and he is hardly known today.  (Except, of course, for the wayward herald trying to identify the coat of arms on his grave!) 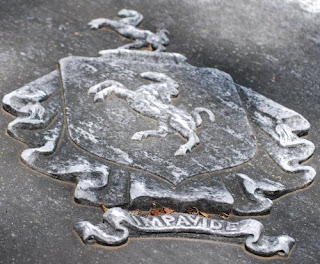 His arms may be blazoned: Sable, a horse rampant argent bridled or.  The crest is: A horse as in the arms, and the motto is: Impavide (roughly, Undauntedly). Impavide is also the motto of the 90th Missile Wing, a unit of the United States Air Force Global Strike Command, 20th Air Force, stationed at Warren Air Force Base just west of Cheyenne, Wyoming.

Burke's General Armory gives: Cabbell or Cabell: Vert fretty argent, overall a fess gules. Crest: An arm in armor embowed the hand grasping a sword, all proper. Another crest: A square padlock or. Motto: Impavide.  Except for the motto, none of this matches "our" Cabell here.

Crozier's General Armory, however, cites: Capt. William Cabell, Virginia, 1700. Quarterly, first and fourth, Sable a horse rampant argent bridled or; second and third, Azure ten estoiles or, four, three, two and one. Crests: (1) An arm in armor embowed the hand grasping a sword, all proper. (2) A crescent argent surmounted by an estoile or. Apparently no relation to this Cabell, or at the very best but a distant one.

Papworth's Ordinary of British Armorials, however, notes Cabell, Buckfastleigh, county Devon: Sable a horse upright argent bridled or, a good match to the arms on the grave here.
Posted by David B. Appleton at 6:00 AM