St. Luke's Church ("The Old Brick Church"), located near Smithfield, Isle of Wight County, Virginia, is the oldest existing church of English foundation in America and the nation's only surviving Gothic building. I have given the URL of their website below. It's a pretty church, and well worth the visit, even if you're not looking for heraldry.

Anyway, they have a couple of stained glass memorial windows with coats of arms. I'll discuss the first today, and the second next time. 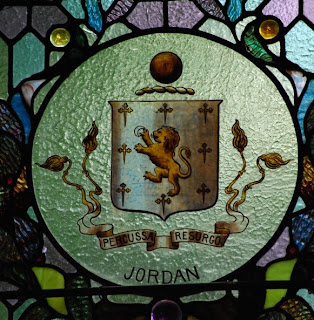 Arms: Azure[?], a lion rampant or maintaining in the dexter paw a decrescent bendwise sinister within an orle of [eight] crosses bottony fitchy or.
Crest: A bezant[?]
Motto: Percussa resurgo
Name underneath: Jordan

The nearest Jordan arms in Burke are: Jordan (co. Somerset, and Chittern Whistley, co. Wilts, 1604) Azure a lion rampant between eight crosses crosslet fitchy or, a chief of the second (another, the lion charged with a crescent gules). Crest, A mount or, over it a scroll with this motto, Percussa resurgo. Another crest: A football proper.

The blue of the field has largely disappeared, though it does show a bit in a close-up of the window. It is entirely possible that the crest here is a football proper; the color is far darker than the gold of the lion and crosses.

Col. Jordan is apparently not buried in or near the chapel; at least he is not listed among the Miscellaneous Headstone Inscriptions list that I found. (However, the Church’s website at http://historicstlukes.org/ says that “Archaeologists believe that only ten percent of the markers still exist.”) Nor could I find out any real information about him, although I suspect that he is certainly related to the many Jordans who are buried in the church’s graveyard.
Posted by David B. Appleton at 6:00 AM