The Last Military Heraldry (That I Saw) in Virginia

We drove on out to the Cape Henry Lighthouse on the Atlantic shore in Virginia (actually, there are two lighthouses out there, the old original one and the new one; we were there to see the old one). I knew that there was a chance of seeing some heraldry – in addition to my belief that you can find heraldry everywhere, the lighthouse is, after all, on a military base – but I also knew that the chances of getting any good photographs of it were slim (the lighthouse is, after all, on a military base, and they’re awfully wary lately of people taking pictures willy-nilly).

However, I did get one. On the leading edge of the hood of a pickup truck (one of the larger Toyotas) in the parking lot for the old lighthouse was a sticker/decal with the arms of the U.S. Air Force Communications Command. 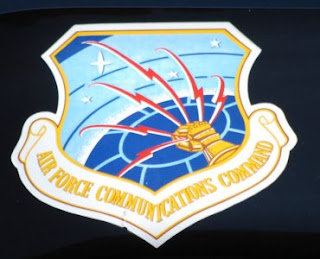 Not, to my mind, the best in heraldic design, it is nonetheless heraldry.  And sometimes you just have to be satisfied with that.
Posted by David B. Appleton at 6:00 AM