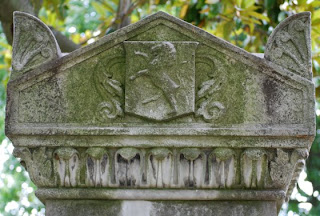 A coat of arms appears in two places on the monument, at the top of the column and again on its base. It is quite clearly a single rampant lion on the field. There is also a shield shape on the center front of the column, which I will discuss below. 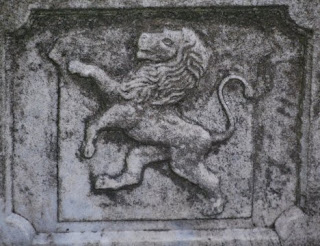 Burke is of no assistance in finding this coat of arms; none of the Millers he has listed bear a rampant lion on the field. Papworth might possibly be of some help, but he had 34 pages of entries consisting of [Field] + [Beast, Lion], and I have no desire to go blind today reading through all of those entries looking for “Miller”.

All of Mary Ann’s vital information is carved on a shield shape on the front of the monument:

Mrs. Mary Ann
Harper
daughter of
Joseph Miller
born at Brampton
near Carlisle
England
March 20th 1803
died at Farmington
Albemarle Co. Va.
April 8th 1877
All of the information about her brother Joseph and his life and accomplishments is carved on the sinister side of the monument (as you look at it from the front), filling up nearly its entire height.
Posted by David B. Appleton at 6:00 AM