Our first coat of arms from Hollywood Cemetery is from the monument of Dr. James Bolton (1812-1869). In addition to the arms, there is a motto scroll, but there is nothing written or engraved on the scroll. The helmet is of a common 19th C style, one which is impossible to have actually been worn (you'd never fit your head through the neck portion), with the mantling issuant horizontally from the sides of the helm like water gushing from a fire hose. The crest is perched atop the helm issuing from a stiff torse that sits at a rakish angle to the helm. (Again, not something that could have been done back in the days when real wreaths and crests were affixed to real helmets.) 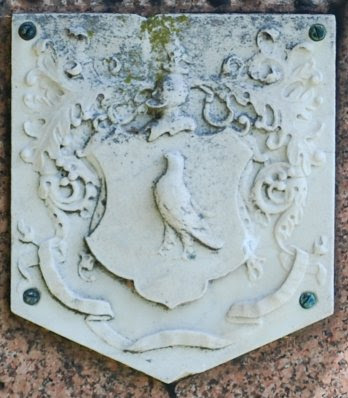 Crozier’s General Armory gives the arms as: Sable, a falcon close argent, armed or (another: beaked, membered, jessed and belled or), one charged on the breast with a cross (John Bolton, New York), the other with a trefoil slipped proper (Robert Bolton, Pennsylvania). Crest: A falcon of the shield (the other: A falcon close argent as in the arms).

I don’t see anything on the breast of the falcon in the arms here, but that does not necessarily mean that nothing is supposed to be there.

Find-A-Grave gives a brief biography of Dr. Bolton: “Pioneering Physician. He received his MD from the College of Physicians and Surgeons in New York in 1836. Taking up practice in Richmond, Bolton took an early interest in eye diseases at a time when ophthalmology was not considered a separate specialty. He published many medical papers in the 1840s and 1850s and his papers describing the use of ether and chloroform during surgery are credited with encouraging many physicians concerning the safety of anesthetics. During the Civil War, he was commissioned a surgeon in the Confederate Army and served at various hospitals around Richmond. He was one of the founders of Richmond's Bellevue Hospital (1854). (bio by: Garver Graver)” (http://www.findagrave.com/cgi-bin/fg.cgi?page=gr&GSfbid=46521264&GRid=6991736)
Posted by David B. Appleton at 6:00 AM