It does not contain a coat of arms (although the names of Dr. McCaw and his wife appear on shield shapes), but a crest (though without a torse). It took me a while to decide whether the capital C in McCaw was a C or a G; after careful comparison with the other Cs on the stone that pretty much had to be a C and not a C (like the one in Mc), I decided that it had to be a C. 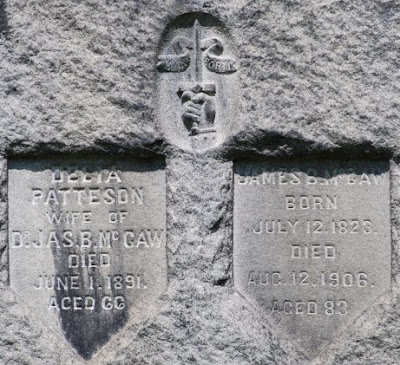 Burke’s has no listing for McCaa or McCaw. But typically there would not be a crest without an accompanying coat of arms, so I looked a little farther afield in potentially related spellings.* Finally, under MacKay, we have the arms Azure on a chevron or between three bears’ heads couped argent muzzled gules a roebuck’s head erased between two hands issuant from the ends of the chevron each holding a dagger all proper, with the crest A dexter arm from the elbow erect, holding a dagger in pale all proper pommel and hilt or, and with the motto Manu forti (Baron Reay, and with differences [bordure gules, engrailed bordure or, and wavy chevron] to several other MacKay’s in the middle to late 18th Century).

Going back to Fairbairn’s and looking under MacKay, we find: A dexter cubit arm erect, in hand a dagger in pale, all proper, hilt and pommel or, with the motto: Manu forti.

There are a couple of photographs of Dr. McCaw taken at different times in his life on-line at: http://www.findagrave.com/cgi-bin/fg.cgi?page=gr&GSln=Mccaw&GSfn=james&GSbyrel=in&GSdyrel=in&GSob=n&GRid=22461824&df=all


* Spelling changes occurred regularly on this side of the Atlantic, though not, as is often supposed, at Ellis Island. One reason was the lack of standardization of spelling until the later 1800s and the publication of Noah Webster’s dictionary. Even Mark Twain is supposed to have said that he didn’t have any respect for a man who couldn’t think of more than one way to spell a word. The other reason is that the person who wrote the name was not always the person who bore it, leading to misspellings from mishearing or misunderstanding the name. In my own family, the surname Forbes turned in two to three generations into Forbush, by way of New England clerks writing the name as they heard it from the bearer, Daniel Forbes, who was born in northern Scotland and apparently had a strong Gaelic accent. Forbes (two syllables, FOR-bess) became in the ears of at least one clerk "Farrabbas," and shortly thereafter turned into Forbush.
Posted by David B. Appleton at 6:00 AM