George Cole Scott, Sr. was a delegate from Virginia to Republican National Convention in 1932.  The arms from his grave are on the left; those of his son, George Cole Scott, Jr. are on the right.  There is a clear difference in the quality of the materials used for each monument, as the older arms (for the elder Scott) are in far better shape than the arms for his son. 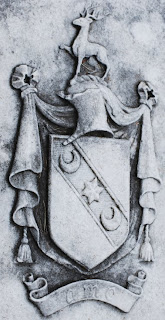 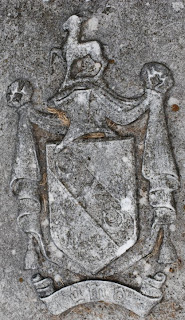 The arms may be blazoned as: Or, on a bend azure a mullet of six points between two crescents argent.  The crest is: A stag trippant, and the motto is: Amo (I love).

Or on a bend az. an estoile (or mullet) betw. two crescents of the first. Scot, Buccleuch, as borne on an inescucheon by James Crofts afterwards Scot, Duke of Monmouth after 22 April 1667, as Duke of Buccleuch, Earl of Dalkeith, Baron Whitchester and Ashdale 20 April 1673, Z, 639 ; and after his attainder, 1685, by his son James Scot (Earl of Doncaster afterwards) Earl of Dalkeith, Z, 644; and by his son Francis Scot, Baron Tyndale and Earl of Doncaster 23 March 1743, Duke of Buccleuch 1732 ; and by his uncle Henry Scot, Baron Goldylinds, Viscount Hermitage, and Earl of Delorain29 March 1706, extinct 1807; Z,644.

Fairbairn's Crests says the motto “Amo” (I love) belongs to “Douglas, Hoops, Montagu-Scott, Scott, and Scote.
Posted by David B. Appleton at 6:00 AM