Looking across the courtyard of King's College, we get another view of the very impressive edifice that is the Chapel there. 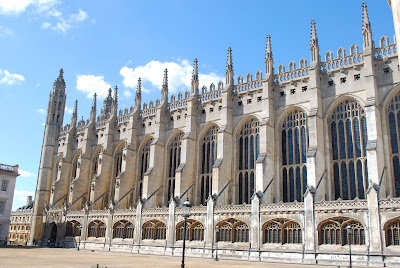 More information about the history and construction of this unique building can be found on-line at https://en.wikipedia.org/wiki/King%27s_College_Chapel,_Cambridge

Way down on the left (to the south) is the main entrance to the Chapel, 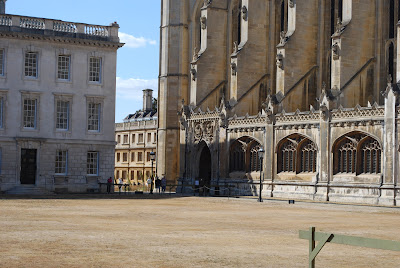 which, as you get up to it, demonstrates how truly impressive it, too, is: 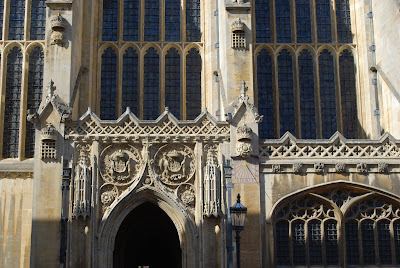 If you look carefully (and you can click on the image above to go to a larger, more detailed photograph), we see more examples of the Royal badges we found on the main entrance to King's College itself: crowned Tudor roses; crowned portcullises; Tudor roses; fleurs-de-lys; plus in the frieze above the two coats of arms, the Royal badge that is the Prince of Wales feathers.
And then we come to the coats of arms themselves: 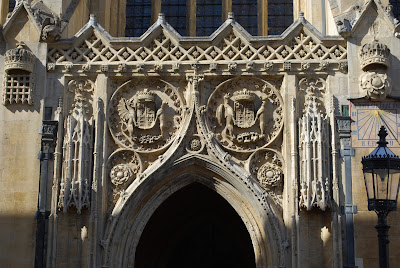 Each supported by a dragon and a greyhound (in slightly different postures), these must be the Royal arms of King Henry VII and King Henry VIII: Quarterly: 1 and 4, France modern; 2 and 3, England. France modern being, of course, Azure three fleurs-de-lys or, and England, Gules three lions passant guardant in pale or.
In addition to all of this identifying heraldry, if you click on the first image above, you may notice that in addition to the crowned roses and crowned portcullises on the facings of the four buttresses to the left, there are also three-dimensional, that is to say, "in the round", depictions of the royal supporters: lions, dragons, and greyhounds, on two different levels, standing atop the angles where the buttresses jut further out.
Posted by David B. Appleton at 2:00 AM