Heraldry (and Wildlife!) on the Ceiling of the Main Gate


Only part of today's post is going to be about heraldry; the other part is going to feature the wildlife found in and amongst the heraldry on the ceiling of the main gate leading into King's College, Cambridge.

But first, an overview, followed by the heraldry! 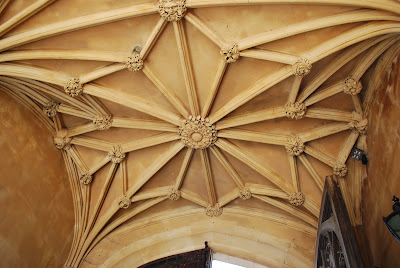 That's a shot of the ceiling inside the main gate of King's College.
Central to it is a Tudor rose, though in this instance it is carved as a triple-rose rather than the more common double-rose. (If you click on the first image above, and then zoom in, you will find two of the Tudor double-roses.) 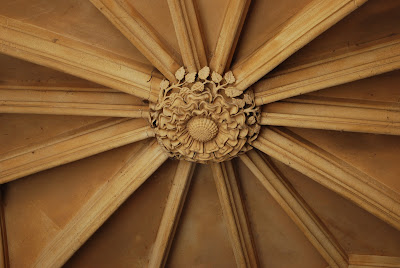 All of the carvings in this ceiling are extremely detailed, from the central triple-rose with its circlet of leafy rose vines, through the two green men, to the double-roses and oak leaves and acorns, and I recommend that you click on the first image above to better see the details of all of these carvings.)
But what of the wildlife I promised, you ask? Well, if you look carefully in an enlarged version of the first picture above, you may note that one of the carvings at one of the junctions of the ribs in the ceiling seems to have a little something "extra" attached to it.
By going to the next section of the ceiling inside the gate, we can see a little more clearly what is going on. 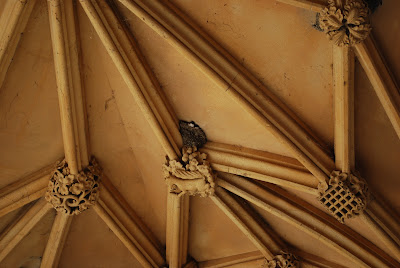 In addition to the portcullis badge of the Beauforts inherited by King Henry VII, in the center (above the squirrel and oak leaves and acorns) the dark spot with a bit of white at the top is actually a swallow's nest, with two of the young swallows sticking their heads out, looking for a parent to return with food. (Once again, clicking on the image above will take you to a larger version where it is more clear what is going on there.) 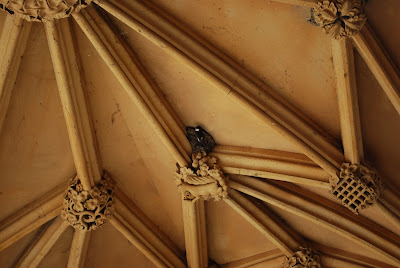 And in this image, one of the parents has returned and is feeding the youngsters.
So, as I said, heraldry and wildlife (both carved and real). It was really neat to be able to stand there for a few minutes and watching the adult birds come and go feeding their young.
Posted by David B. Appleton at 2:00 AM