You may, or may not, have noticed them in my last post, but there are multiple examples of Royal badges on the entrance to King's College, Cambridge.

Though King's College itself was founded by King Henry VI, the badges on the entrance clearly relate to the first two Tudor monarchs, King Henry VII and King Henry VIII.
For example, going back to our picture of the entire edifice: 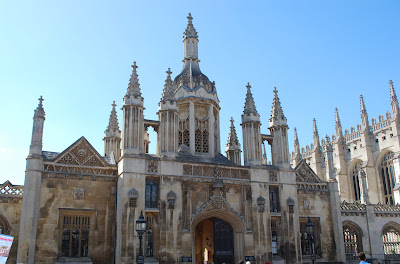 We find, on each side of the main gate, two Royal Tudor badges: a crowned double rose (the Tudor rose, generally depicted as a white rose on a red rose), and a crowned portcullis with chains (which was brought to King Henry VII by his mother, the heiress Lady Margaret Beaufort. We have already discussed Lady Margaret in conjunction with her founding of Christ's College and St. John's College, both of which use her arms and who display her badges - including the Beaufort portcullis badge - on their entrance gates.) 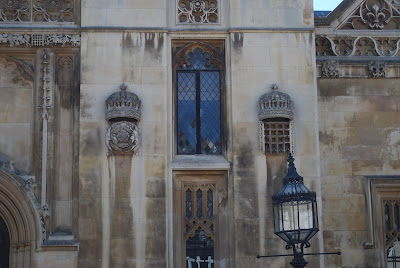 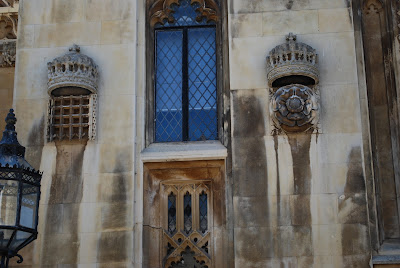 And then, on the two peaked roofs on either side of the main gate, we find more Royal badges: 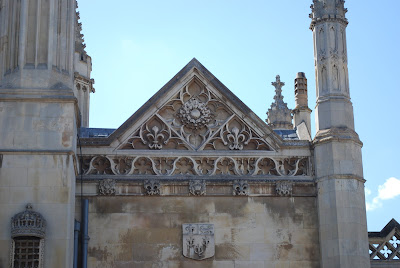 If you look closely (and you may want to click on the image above to see a larger version), near the peak we have a Tudor rose, with a fleur-de-lys on either side below it. Then, in the second row of the frieze below the rose and fleurs, we have alternating badges: Tudor rose, fleur-de-lys, Tudor rose, fleur-de-lys, and Tudor rose.
As Heraldic Badges in England and Wales, II.1. Royal Badges by Michael Powell Siddons notes: "This combined Tudor rose represented the union of the dynasties of Lancaster and York and was a powerful political symbol."
The fleur-de-lys was also a powerful political symbol, of course, and represented the English crown's claim to the throne of France.
We'll find some more depictions of these Royal badges as we pass through the gates of King's College and enter the Chapel there. Watch for some of the triple and even quintuple Tudor roses to be seen there.
Posted by David B. Appleton at 2:00 AM