Arms and Badges in the Courtyard of King's College, Cambridge


Unsurprisingly, once having passed through the main gate of King's College, Cambridge and its Royal arms and Royal badges and College arms, there are more arms, and badges, and even non-heraldry to be seen on the buildings facing the interior courtyard there. 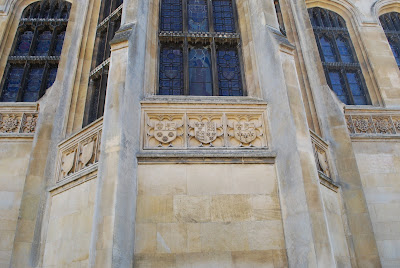 Here is a notable example of all three! In the lower frieze on this bay, we find the Royal arms of Kings Henry VI, Henry VII, and Henry VIII between (on the left) the arms of King's College and (on the right) the arms of Eton College. We have discussed the relationship between these two latter coats in an earlier post.
But wait; there's more! If you look carefully on the same frieze to the left and right of these three coats of arms (and you may want to click on the image above to see it in more detail), you will notice two entirely blank shields on each side.
And then, looking further up to the next level, the frieze there consists of a row of Tudor roses (in this case, triple-roses, consisting of five petals each), a Tudor Royal badge.
Further along, we came to this bay window: 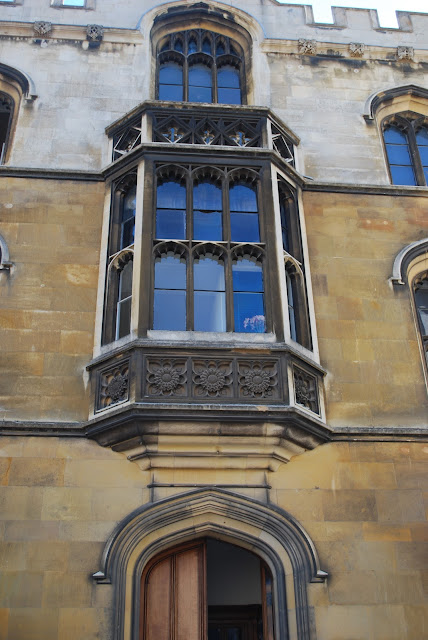 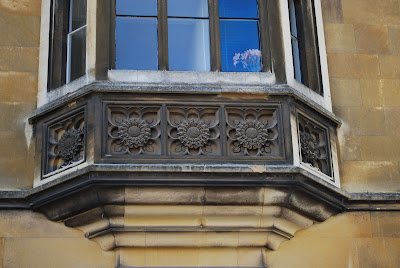 a row of five Tudor rose badges (also consisting of triple-roses, but here each rose has nine petals instead of the more usual five. Well, they do sometimes say that "Nothing succeeds like excess." If five petals is good, then nine must be even better, right?). I think it's also kind of cool how the stone carvers have placed sprigs of three rose leaves in the larger frames on the upper left and right and lower left and right of each rose. (You may need to click on the image above to see this in better detail.)
Anyway, with all of this heraldry, both arms and badges, on the inside and interior of the main gate and on the buildings around the courtyard, what are we likely to see when we make our way to King's College Chapel?
Posted by David B. Appleton at 2:00 AM