Sometimes, it really helps to have the book.

I had photographed this gate (and the building behind it) without fully realizing at the time that there were two (count 'em! two!) coats of arms on the gate. Each one done twice! Not counting the two crests, each atop a pillar framing the gate. 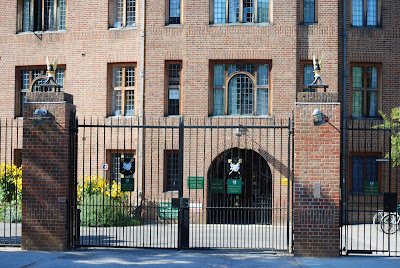 So I get home and I'm cleaning up the pictures (straightening, mostly, and cropping) and I realize that I recognize one of the two coats of arms (the little one on the green signs), but the other one, the black shield, is a bit of a poser. 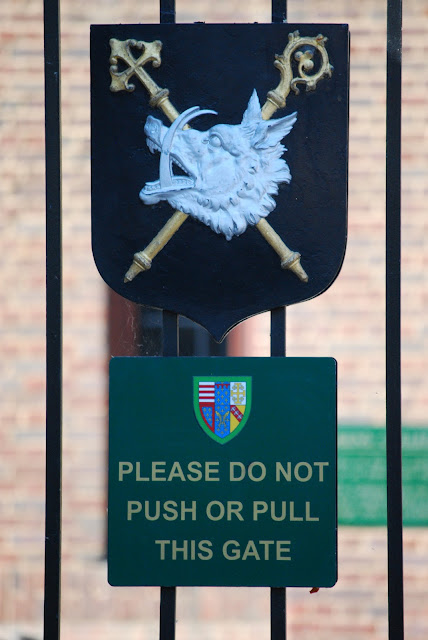 The smaller shield on the green warning sign about pushing or pulling the gate is the arms of Queens' College, and is effectively Quarterly of six: 1, Hungary, 2, Anjou ancient/Naples, 3, Jerusalem, 4, Anjou modern, 5, Bar, and 6, Lorraine, all within a bordure vert.
These arms are those of Margaret of Anjou, Queen to King Henry VI, being the lordships and dignities of her father, René of Anjou, differenced by the bordure. They were granted to the College in 1575.
So far, so good. But what of the black shield with the crossed processional cross and crozier both surmounted by a boar's head?
Fortunately for me, and thus for you, I have a copy of The Cambridge Armorial, compiled by members of the Cambridge University Heraldic and Genealogical Society and edited by Cecil Humphrey-Smith, Heather E. Peek, Gordon H. Wright, and C.W. Scott-Giles. Published in 1985, it's not a brand-new volume, but it certainly covers the arms of the City of Cambridge and the University of Cambridge and its colleges at that time.
And so we learn from that book that the black shield is effectively an alternative coat of arms to that of Queen Margaret, consisting of a white boar's head derived from King Richard III's white boar badge surmounting a processional cross for St. Margaret and a crozier for St. Bernard. This coat has been used by the College since at least 1544.
So there you go.
Additionally, the gate pillars are each surmounted by a crest, Issuant from a coronet or an eagle rousant [personally, I'd blazon it as rising] sable winged or: 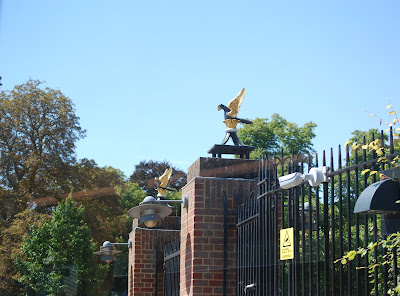 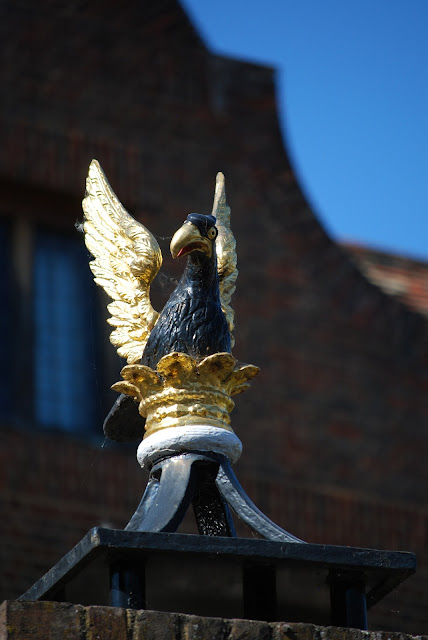 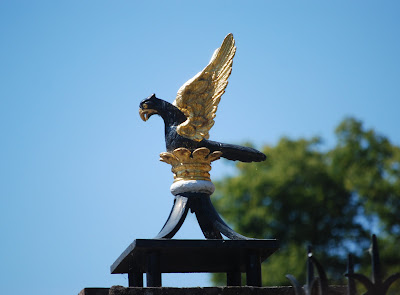 And there you have it! Two different coats of arms, plus crest, on a gate to Queens' College, Cambridge.
I have to admit, I really like seeing a crest done "in the round".
Enjoy!
Posted by David B. Appleton at 2:00 AM