Having looked at the gate to Christ's College, Cambridge, which prominently displays the arms, crest, supporters, and several badges of its founder, Lady Margaret Beaufort, we move on to the gate of the other Cambridge college which she helped to establish, St. John's College. 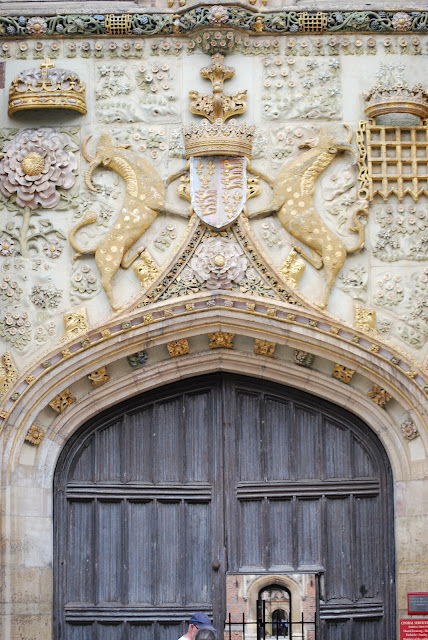 Not quite as in-your-face colorful as the Christ's College gate, St. John's College, too, bears the Beaufort coat of arms with its yale supporters, along with crowned red roses, several examples of the chained portcullis badge of the Beauforts, and a lot of daisies, or marguerites, a badge playing off of Lady Margaret's given name.
Here's another image, taken in a different light, which better shows the colors of all the carvings. 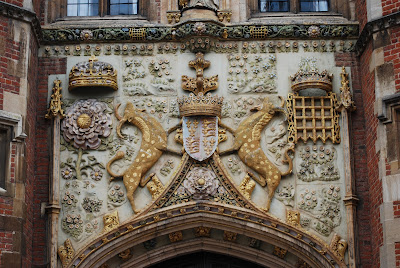 Lady Margaret began the development of St. John's College shortly before her death in 1509, and its foundation was completed by her executors in 1511.
And, of course, the information sign outside the gate bears the arms, crest, and supporters: 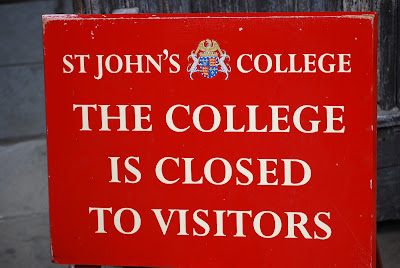 And there you have it: two Cambridge colleges, two very impressive gates, and one historical coat of arms with crest, supporters, and various badges.
Just the sort of thing you might think about using as a model for a gate to your own abode, right?
Posted by David B. Appleton at 2:00 AM