In our final steps along the façade of the train station in Cambridge, England, we find the following College heraldry:

Selwyn College. The College was founded by public subscription as a memorial to George Augustus Selwyn, Bishop of New Zealand and later Bishop of Lichfield. The grant of arms, made in 1964, impales the See of Lichfield and Selwyn family, differenced by a black border, so as to difference the College's arms from those of Bishop Selwyn: 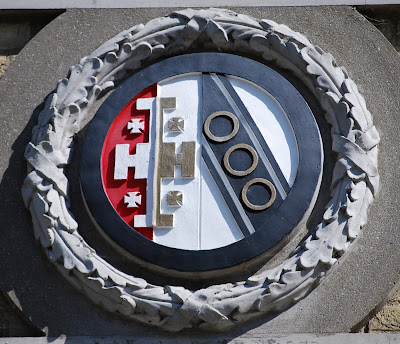 Churchill College. These are, of course, the well-known arms of Sir Winston Churchill (Quarterly Churchill and Spencer), differenced by the addition of a book overall in the center. A trust for the purpose of founding a new college at Cambridge was set up in 1958; it admitted its first post-graduates in 1960 and its first undergraduates in 1961: 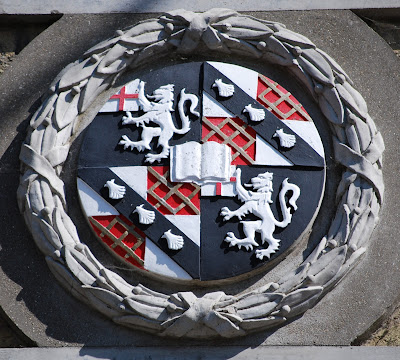 Darwin College. The College was founded in 1964, and became a full college in 1976. The arms commemorate the principal benefactors - the Darwin family, and Sir Max Rayne. They consist of the arms of Darwin impaling Rayne, all within a gold border: 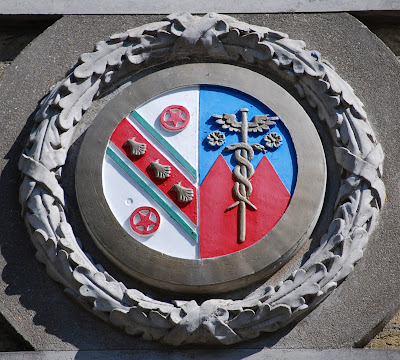 Clare Hall (not to be confused with Clare College, seen earlier) was founded in 1966. The arms reflect the relationship with its parent foundation (Clare College), and follows the Clare family's ancient practice of varying the number of gold chevrons on the red field: 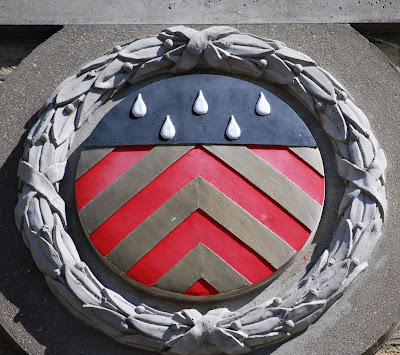 Newhall College was founded in 1854, and granted arms in 1971. The dolphin symbolizes the River Cam; the embattled bordure alludes to the College's situation overlooking the site of Cambridge Castle; and the three mullets in chief are from the arms of Murray, referencing Miss A.R. Murray, later Dame Rosemary Murray, the first President of New Hall: 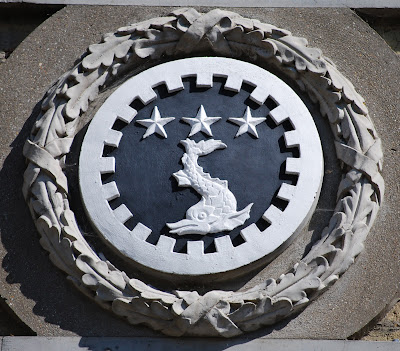 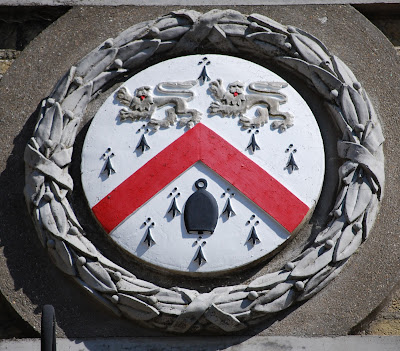 and Robinson College, a part of the University in 1977 and granted a Royal Charter in 1985, is named for its benefactor, Mr. David Robinson. His love of the river and of horse racing are commemorated in the winged horse Pegasus over the wavy bars in the arms of the College: 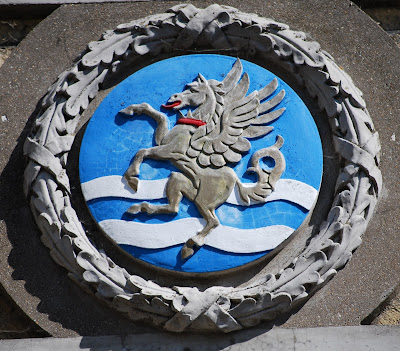 That completes the 31 armorial roundels that I photographed on the face of the train station in Cambridge.
There is, apparently, a 32nd roundel, containing the arms of Newnham College, but it is apparently very difficult to find as it is above a canopy on the platform side on the south side of the building. And I missed it when I was there. Sorry about that!
But other than that omission, I hope that this little excursion has been of interest to you. I know it was educational for me!
Posted by David B. Appleton at 2:00 AM