College Arms in the Cambridge Union Building, Part 1 of 2


I have to apologize for this (and the next) one, I really do. We had gone to the Cambridge Union Building for the opening ceremony of the Congress, and I noticed that all around the front of the balcony in the main hall there were plaques with the arms of many (most? all?) of the Colleges of Cambridge University.

But as I was pressed for time, as the ceremony was to begin soon, as I made my way around the room I did not, as is my usual wont, take two or even three pictures of each shield. I like to take more than one photo of something, because many times one or another will be a little out of focus, or blurred, or whatever. And if I am taking more than one photo of an item, it vastly increases the likelihood that I will have at least one picture that is right on the button.
But, as I said, I was pressed for time, and failed to do that in the Cambridge Union. As a consequence of that, and also partly because of the lower lighting in the room, a number of the pictures I took came out unusable, and some others on the edge of acceptability, as you will see below.
Nonetheless, it was a great display of College heraldry, and worth sharing with you despite the lower quality of some of the pictures. And you should recognize many of the arms here from our posts about the arms of the Colleges on the façade of the railroad station in Cambridge.
First, though, here are a couple of establishing shots, to show you an overview of how these shields were placed on the front of the balcony in the hall. 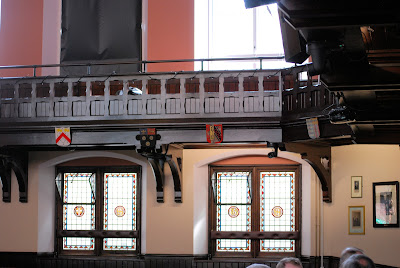 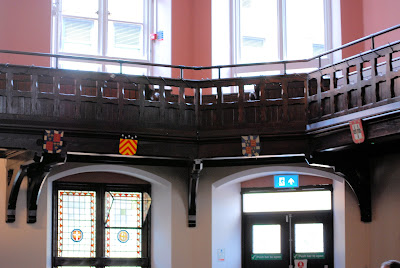 And now, some of the individual College arms:
First, Wolfson College: 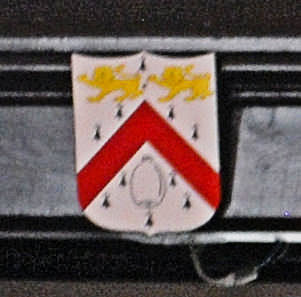 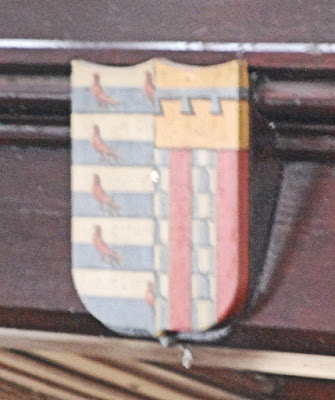 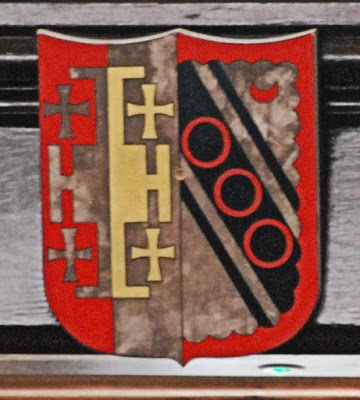 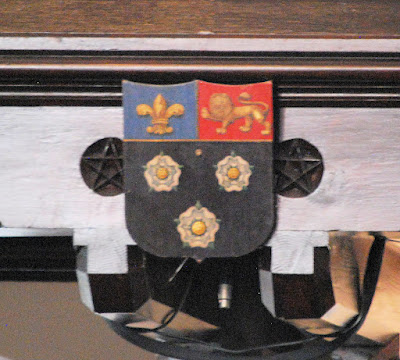 St. Edmund's House. The arms are those of the Dukes of Norfolk (the 15th Duke presented them with the property now known as St. Edmund's House). There should be a canton in the upper left corner of the shield, Or a cross patonce between four martlets gules, intended to represent St. Edmund of Abingdon, Archbishop of Canterbury 1233-1240. This canton is attributed arms, as there is no evidence that he either inherited or bore arms during his lifetime. 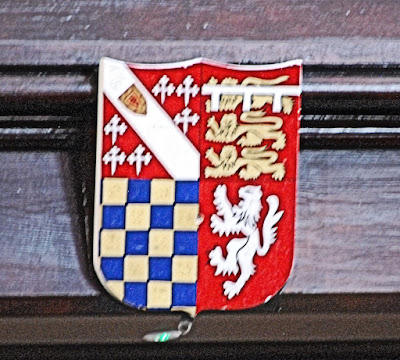 Robinson College. Unusually, the artist has placed the motto scroll directly onto the shield here: 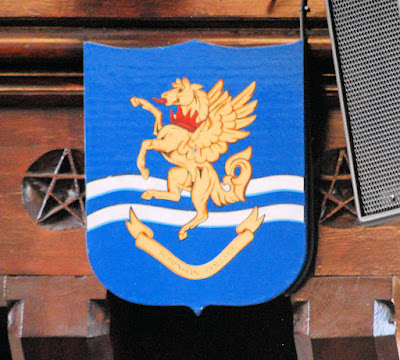 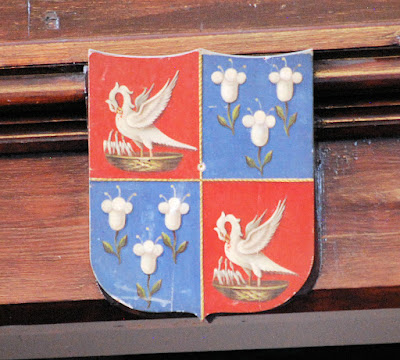 It is interesting to see some of the different artistic styles used in painting the various shields in this hall. The arms of King's College and Corpus Christi College in particular have an "antique" feel to them, while many of the others (especially Robinson College) are very modern.
Next time, the remaining College arms in this hall at the Cambridge Union Building.
Posted by David B. Appleton at 2:00 AM