Heraldry Down the Street and Around the Corner

Stepping out the front door of our hotel in Cambridge, England, and turning immediately to our left, this is the scene we saw: 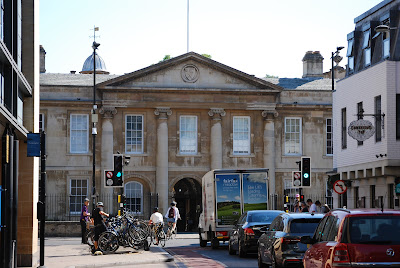 And this is a close-up of the coat of arms on the pediment of that building at the end of the street: 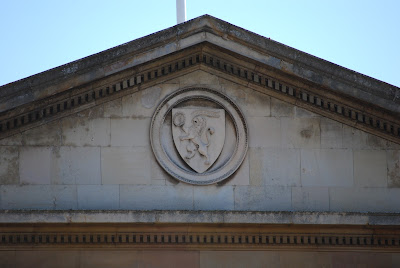 Now the, walking down to the end of the street and turning left yet again, about a block down on the left we find this building façade: 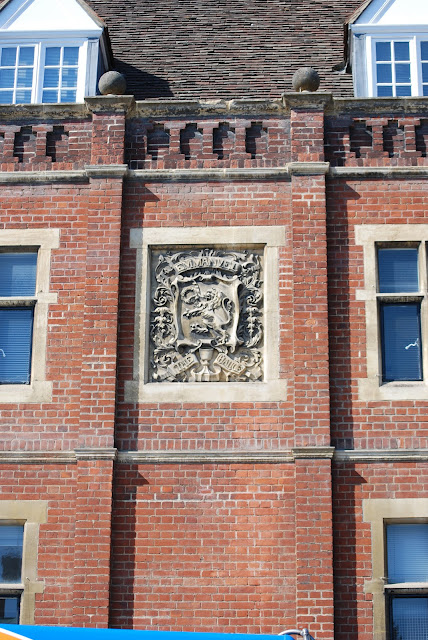 Where we once again see this coat of arms: 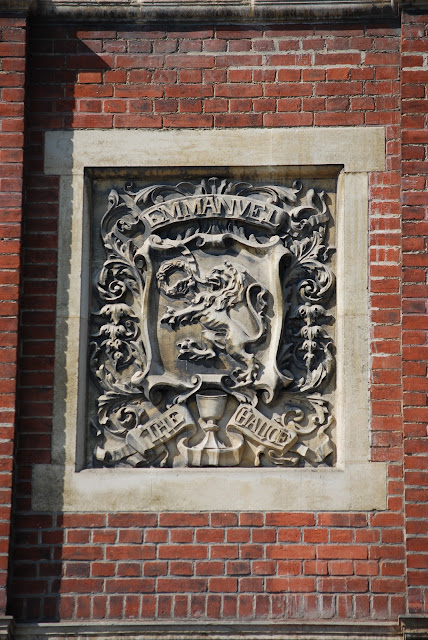 Both instances* are the arms of Emmanuel College, Cambridge.
The arms are generally blazoned as Argent a lion rampant azure armed and langued gules holding in its dexter paw a wreath of laurel proper and issuing from its mouth a scroll charged with the word EMMANUEL. (Nowhere, from the grant of arms in 1588 until now, are there official tinctures for either the scroll or the word Emmanuel. The marginal illustration on the patent shows a white scroll with black letters, but in a book published in 1621 it is a black scroll with yellow letters, and in modern representations it is often a blue scroll with yellow letters. So there you go.
Robert Cooke, Clarenceux King of Arms, granted these arms in 1588, taking the lion from the "ancient arms" of the founder, Sir Walter Mildmay. However, the "ancient arms" of Mildmay (Argent three lions rampant azure) were allowed to Sir Walter by Cooke on evidence which is now regarded as suspect at best.
Be that as it may, however, these are officially the arms, and have been since the grant of 1588, of Emmanuel College, and can be found, just "down the street and around the corner" from our hotel in the university town of Cambridge, England.
* The chalice and the words "The Chalice" with the second coat of arms presumably refer to the fact that the building itself has long been known as The Chalice: It was the Chalice Inn by 1578, and in 1616 was occupied by a seller of aqua vitae (strong alcoholic spirits). More information about the history of The Chalice can be found on the website of Capturing Cambridge at https://capturingcambridge.org/centre/st-andrews-street/21-st-andrews-street-the-chalice/
Posted by David B. Appleton at 2:00 AM