And today we finish up our look at some of the heraldic stained glass in the Chapter House at Westminster Abbey.

Where we begin with the attributed arms of St. Peter himself, with its crossed keys and "ring of the fisherman" in chief: 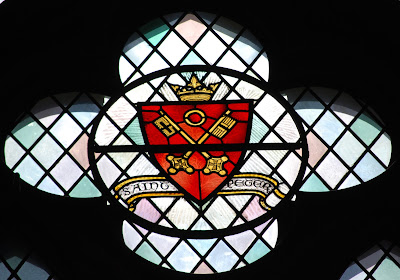 The arms of Thomas Thirlby, the first and only Bishop of Westminster (1540-1550), afterwards Bishop of Norwich (1550-1554) and Bishop of Ely (1554-1559):
The arms of John Vanbrugh (1664-1726), architect (he designed Blenheim Palace), dramatist, and important to our interests here, herald. He was Carlisle Herald (1703) and then Clarenceux King of Arms (1704-1725). He was an interesting character, as you can see from his biography in Wikipedia (https://en.wikipedia.org/wiki/John_Vanbrugh):
The historical arms of William de Warenne, the 1st, 2nd, 3rd, 4th, or 5th Earl of Surrey (the line ran through a lot of Williams!) or John de Warenne, the 6th Earl of Surrey. Alas, John died without legitimate issue, so the title passed to Richard FitzAlan, 10th Earl of Arundel. 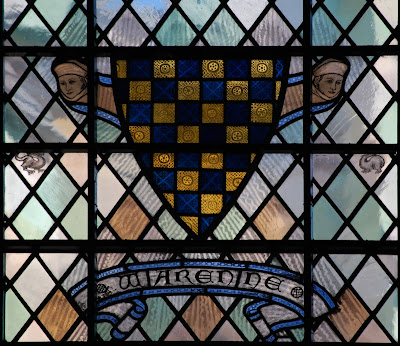 The early, or "ancient" arms of Westminster Abbey: 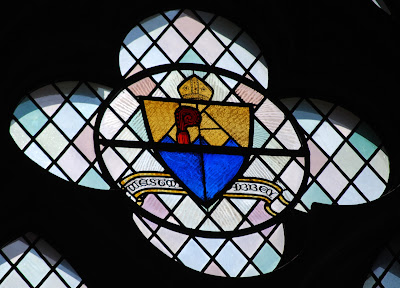 And the "modern" arms of Westminster Abbey, or more correctly, the Collegiate Church of St. Peter at Westminster. The main part of the shield is the attributed arms of St. Edward the Confessor. 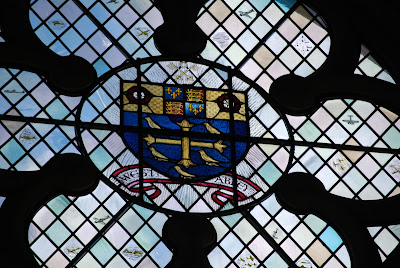 The arms of Richard "Dick" Whittington (1354-1423), merchant, politician, four-time Lord Mayor of London, philanthropist, and inspiration for the English folk tale "Dick Whittington and His Cat." So there!
The well-known arms of Thomas Wolsey, Archbishop of York, Cardinal, and (for a time, until he fell out of favor with King Henry VIII) Lord Chancellor of England.
The arms of Thomas of Woodstock (1355-1387), Duke of Gloucester, and youngest son of King Edward III and Queen Philippa of Hainault.
The architect Christopher Wren (1632-1723) should need no introduction. One of the most acclaimed English architects in history, had the responsibility for rebuilding 52 churches in the City of London following the Great Fire of 1666, including what is considered to be his masterpiece, St. Paul's Cathedral.

Last, but not least, we have the arms of William of Wykeham (1320-1404), Bishop of Winchester. He founded two colleges, New College, Oxford, and Winchester College, Hampshire, both of which use his coat of arms, Argent two chevronels sable between three roses gules barbed and seeded proper (https://en.wikipedia.org/wiki/New_College,_Oxford and https://www.winchestercollege.org/).
Some of my more eagle-eyed readers may see a similarity between the Bishop's and Colleges' arms and my own: Argent two chevronels azure between three apples slipped and leaved proper. I feel confident, however, that my arms do not infringe on these others.
And that's it for our foray into some of the stained glass heraldry in the Chapter House at Westminster Cathedral! Who know what we're going to see next time?
Posted by David B. Appleton at 2:00 AM