So there we were, taking the better part of a full day to visit Westminster Abbey, and I'm pretty sure that about all my wife saw of me while we were there was with the viewfinder of my camera pressed up to my face. (Rather like this shot from our visit to Aachen! And yes, that's a silver and gilt reliquary of Charlemagne, or Carolus Magnus, or as I like to think of him, "Big Chuck", in the background.)

Anyway, I took an unconscionable number of photographs during our visit to Westminster, and today, and for the next several posts, I am bound and determined to share some of them with you. (Lucky you!)
This set is the first of four sets of coats of arms found in the Abbey's Chapter House, hence the similar styles and settings for a number of them.
First, the arms of Margaret Beaufort, daughter of John, Duke of Somerset, who outlived four husbands, and whose son became King Henry VII.
The arms of the Bigod family, Earls of Norfolk: 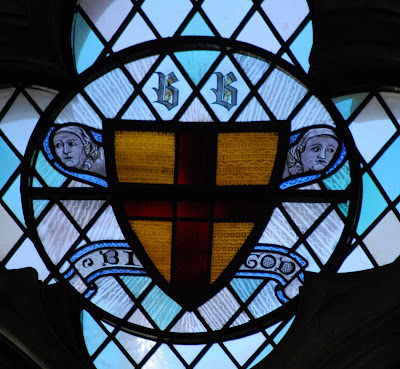 The arms of Sir Reginald Bray, Chancellor of the Duchy of Lancaster. He worked a lot for Lady Margaret Beaufort (above), and had a leading role in several conspiracies to place Henry Tudor on the throne as King Henry VII. His crest (above the shield) is A hempbreak argent.
Geoffrey Chaucer should need no introduction or explanation. His wife, Philippa de Roet, was the daughter of Sir Gilles de Roet, an early herald.
The arms of the Clare family, who produced a number of Earls, Barons, and Knights. Elizabeth de Clare, 11th Lady of Clare, founded Clare College, Cambridge, which uses her arms impaled by those of her husband John de Burgh, all within a bordure sable goutty d'or. 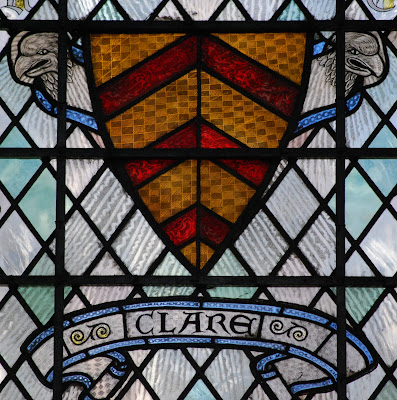 The arms of St. John's Abbey, or Colchester Abbey, dissolved in 1539 by Henry VIII.
The arms of Richard of Cornwall, second son of King John and Queen Isabella. 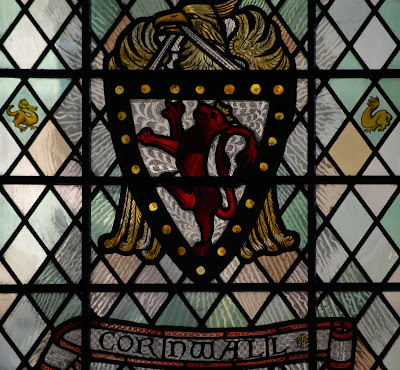 The arms of William Francis Cowper-Temple, 1st Baron Mount Temple, created 1880. As he died without issue in 1888, the peerage became extinct, only to be revived in 1932 when his great nephew William Ashley was made Baron Mount Temple.
The arms of the well-known Thomas Cranmer, Archbishop of Canterbury, impaling the arms of the See of Canterbury.
The arms of Simon de Montfort, 6th Earl of Leicester, a man active in English politics and who played a major role in the constitutional development of England.
The arms of John Denham, English judge, Chief Baron of the Irish Exchequer, and father of the poet Sir John Denham.

Next time, more historical arms from the Chapter House in Westminster Abbey!
Posted by David B. Appleton at 2:00 AM