And now we come to the primary goal of our trip to Helsingør, Denmark: Kronborg Castle.

But instead of just jumping right in and looking at the heraldry that is there, I thought it might be good to discuss some of the history of the castle and why it is so worthy of a visit.

Situated on the coast of Denmark and adjacent to the town of Helsingør, Kronborg Castle is a fairly classic "star fort", so-called because their defenses when seen from above are reminiscent of a star.
Here's a picture of a model of the castle to give you a better idea of what I mean. 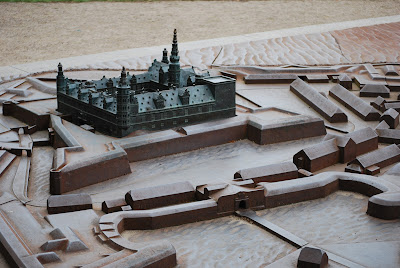 The site of Kronborg Castle was originally a stronghold, Krogen, built by King Eric VII in the 1420s. Along with the fortress Kärnan in Helsingborg on the opposite coast of Øresund, the sound between present Denmark and the provinces of present Sweden, 2.5 miles wide at this point, it controlled the entrance to the Baltic Sea. After the conclusion of the Northern Seven Years' War in 1570, King Frederick II initiated an extension of the advanced bastions to relieve the medieval curtain wall. And from 1574 to 1585, King Frederick II had the medieval fortress radically transformed into a magnificent Renaissance castle.
Frederick was a keen patron of theater and players performed at the castle when he held court there in 1579. (Remember this point; it’s relevant later.)

James VI of Scotland (later also King James I of England) stayed in the castle in 1590 after his marriage to Anne of Denmark.

In 1629, a fire destroyed much of the castle, but King Christian IV had it rebuilt. In 1658, Kronborg was besieged and captured by the Swedes who took many of its valuable art treasures as war booty. In 1785 the castle ceased to be a royal residence and was converted into barracks for the Army. The Army left the castle in 1923, and after a thorough renovation it was opened to the public (that is, people like you and me!).

Kronborg is known to many as "Elsinore", the setting of William Shakespeare's famous tragedy Hamlet, Prince of Denmark, though "Elsinore" is actually the anglicized name of the surrounding town of Helsingør. It is widely believed that the celebratory party held by King Claudius in Hamlet is based on the celebrations and plays performed at the castle for King Frederik II in 1579.

Hamlet was performed in the castle for the first time to mark the 200th anniversary of the death of William Shakespeare, with a cast consisting of soldiers from the castle garrison. The stage was in the telegraph tower in the southwest corner of the castle.

The play has been performed fairly regularly in recent years in the courtyard and at various locations on the fortifications. In one of the rooms of the castle, they display photographs of some of the famous actors who have played in live productions of Hamlet at the Castle.
How many of these actors do you recognize? A few, like Fu Xiru, were completely new to me. But many of the others (e.g., Derek Jacobi, Michael Caine, Richard Burton, Kenneth Branagh, Laurence Olivier, and even Jude Law) felt like old friends.
Be sure to notice the various parts of the Castle in the backgrounds of all of these photos. 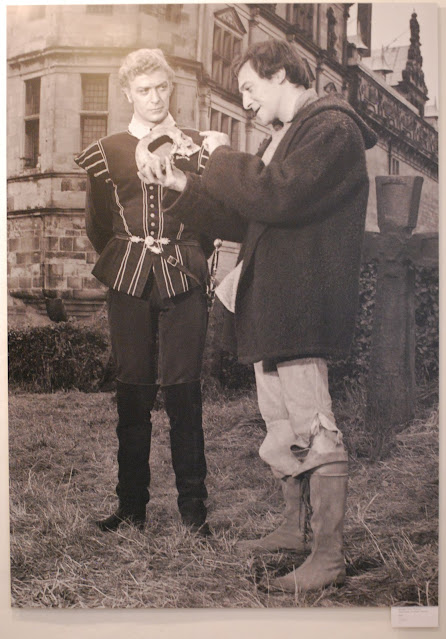 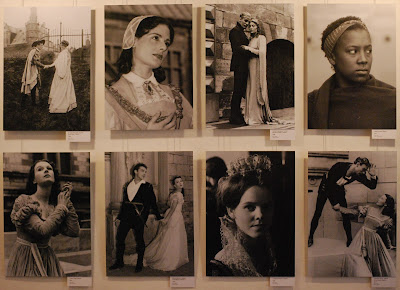 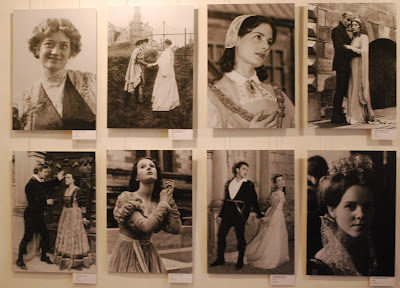 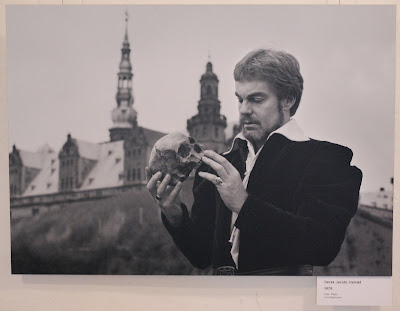 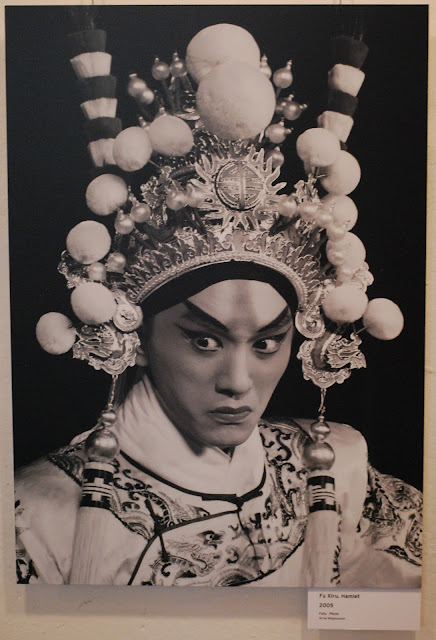 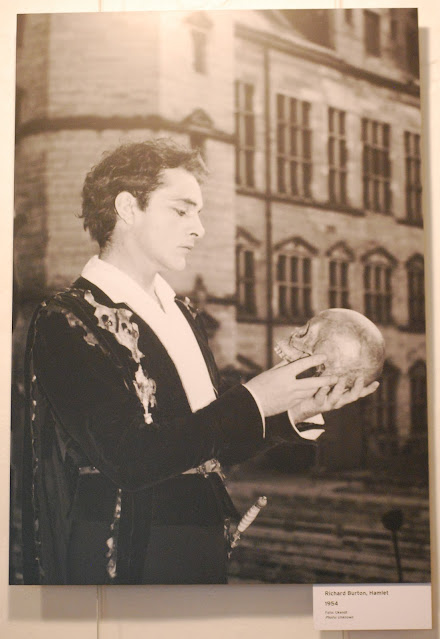 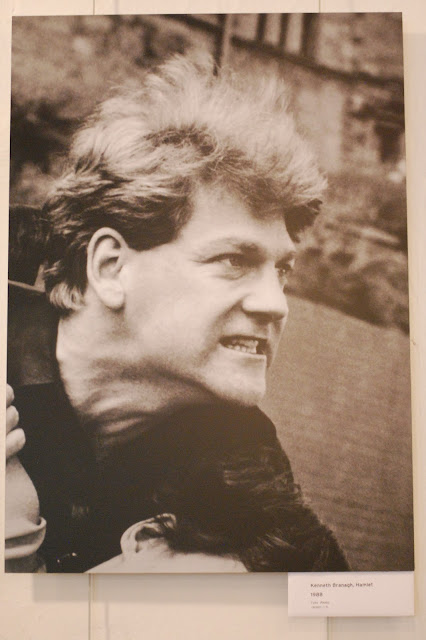 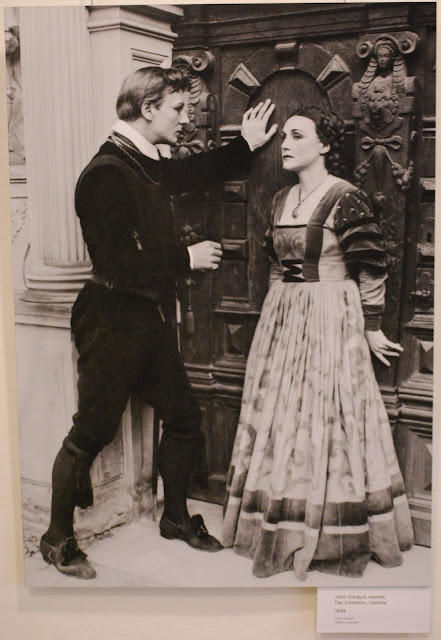 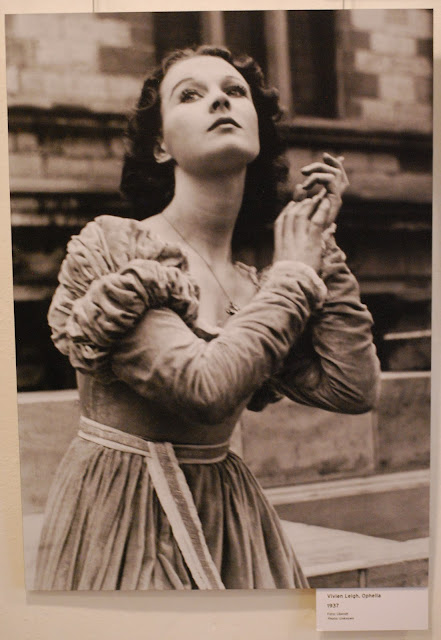 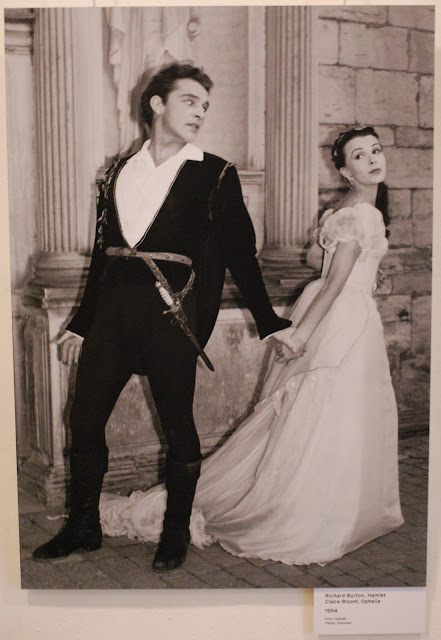 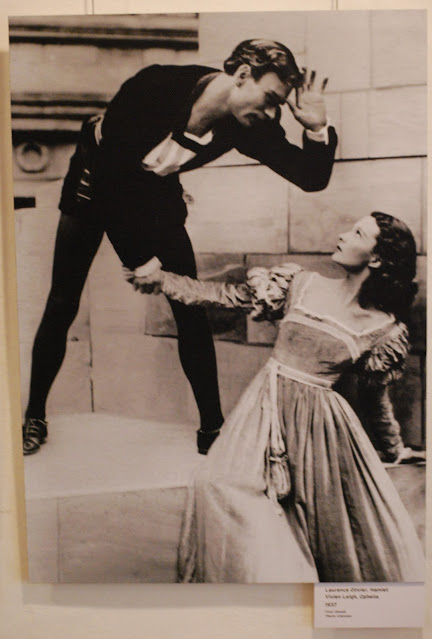 In addition, it is still possible to find 1964's Hamlet at Elsinore, a production of the play starring Christopher Plummer in the title role and filmed at Kronborg Castle.
Anyway, that's your introduction to Kronborg Castle. Next time, we'll look at some of the royal ciphers and heraldry that appear there.
Posted by David B. Appleton at 2:00 AM