In one display case at the Maritime Museum in Helsingør there were a number of plaques with coats of arms on them. A sign in the cabinet explained (in Danish and in English):

THANK YOU FOR VISITING
Many of the ships whose crew[s] visit the church in Rotterdam show their appreciation by giving the church a plaque. These are from the 1969-1985 period. Some 1,000 Danish vessels call at Rotterdam each year.

Some additional research elicited the following information regarding heraldry in the Royal Danish Navy:

The tradition of Naval heraldry in the Royal Danish Navy, can be traced back to the 17th century, where ships had elaborate decorations on its Transom. With the introduction of steel ships, the tradition fell out of favor. There was a renewed interest in the heraldry in the 1930s, however, the outbreak of World War II halted any work. Following a visit to Rotterdam in June 1950, Danish sailors expressed wishes to reintroduce heraldry to the Navy's ships for easier recognition and to increase cohesion on the ships. Following a number of work-groups to determine design and use a standard was produced on 26 April 1957 and approved by the King on the 15 June 1957. On 15 April 1959, the first 15 ships' badges were approved by the King. In 1961, designs for other naval institution badges were approved.

The following photographs are some of the plaques of naval heraldry found in that display case.
The glass of the case and the angle at which I as shooting unfortunately threw off my camera's focus, so not all of the names on the plaques are readable. Those that I could later identify, I have, but there are still two for which I lack the names. Sorry! 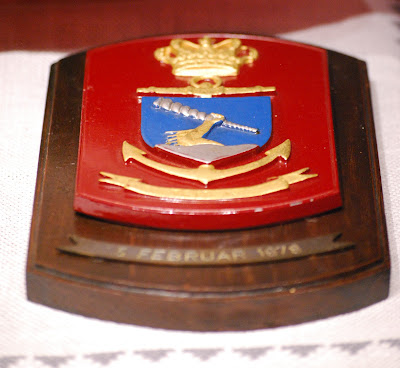 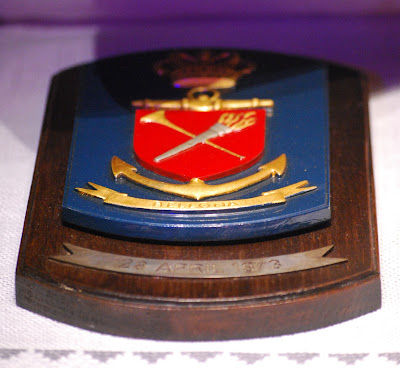 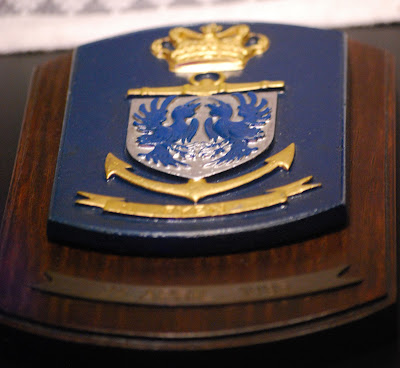 Unidentified. I can neither read the name nor find the coat of arms. 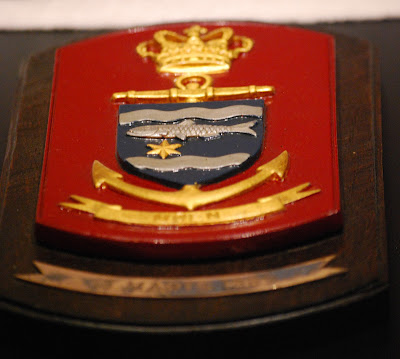 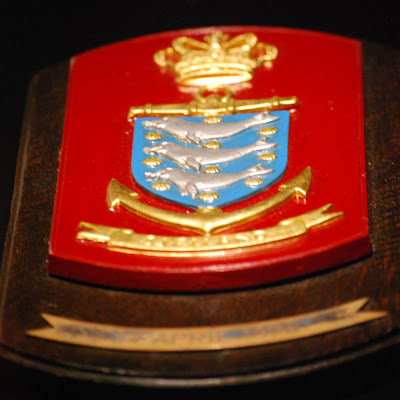 HDMS Sjælland (English: Zealand or Sealand). These are canting arms, with three seals between ten escallops, mimicking the arrangement of charges in the Danish lesser arms of three lions between (usually) nine hearts.

And finally, a non-Danish (but still Scandinavian) ship: 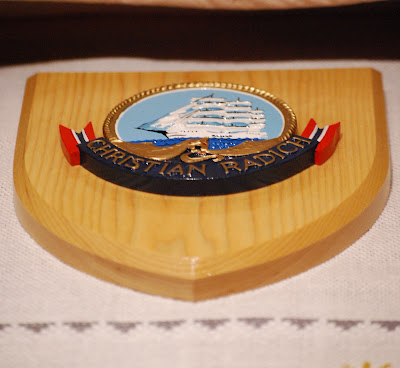 And thus ends our heraldic tour of the Danish National Maritime Museum. Should you ever have a chance to visit, be sure to stop for lunch in their café, and just soak up some of the atmosphere while you eat.
Posted by David B. Appleton at 2:00 AM