It's clear that a lot of maritime-related objects have been donated over the years to the National Maritime Museum in Helsingør, Denmark. Some, as we have already seen, are even heraldic.

I'm not as sure that this next item is truly heraldry, though. I mean, it's on a shield, and certainly there are aspects of it that can be considered to be heraldic. I can even understand the overall effect being achieved by the selection of some of these heraldic elements.
Still, is it heraldry? 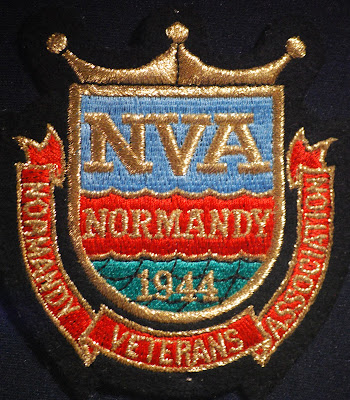 The item is an embroidered badge in the form of a crowned shield surrounded on the sides and bottom by a scroll with the name of the organization, the Normandy Veterans Association. The initials of the Association appear in chief; the word "Normandy" appears in the center on what is heraldically a fess, and the date "1944" appears in base.
The NVA was formed in 1981 of ex-servicemen and women who served in the 1944 invasion of Nazi Germany's Festung Europa in Normandy, France. Owing to dwindling numbers, the association disbanded in November 2014. A commemorative plaque and the Association's (retired) flag can be seen in St. Margaret's Church, Westminster, England, and a granite memorial to the NVA is located in Kelvingrove Park, Glasgow, Scotland.
If I were to blazon this shield, it would be: Per fess azure and vert, on a fess engrailed counter-invected gules fimbriated between the letters NVA in chief and the numbers 1944 in base, the word Normandy all or.
Not necessarily the best heraldic design, and yet ...
The symbolism of the shield is certainly apt. In chief you have the ocean, and in base you have the Normandy landscape. In between the ocean and the higher ground, you have the bloody beaches, washed by the waters between the low and high tide marks: Utah and Omaha, where American armed forces landed; Juno, where Canadian forces landed; and Gold and Sword, where British (English, Scottish, Welsh, and Northern Irish) forces all came ashore, beginning the early morning of June 6, 1944. The five beaches where so many bled and died, staining the sands red.
So, not the greatest heraldry, necessarily, but so appropriate to what it represents that I cannot complain about it. If there is meaning at all in heraldry, then there is plenty of meaning here.
Posted by David B. Appleton at 2:00 AM