So, having explained last time about how I can't always identify the arms I see and photograph during my travels, today I'm going to share an example of (mostly) the opposite. (Of course, it helped that the display of arms was labeled as to the names of the husband and wife!)

Over an archway in Roskilde Cathedral was painted this display of four coats of arms, in two pairs accolée (tilted in toward each other): 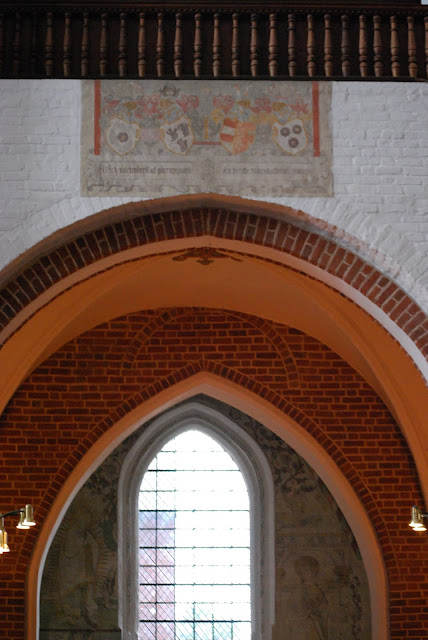 The names inscribed below the arms are Erick Valkendorff and his wife, Berette Andersdaatter (no surname, but the biographical information found, and given below, makes her Berete Andersdatter Lindenov). 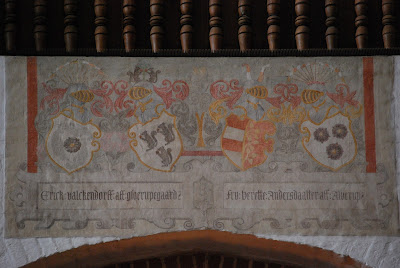 The arms (and you can click on the image above to see a larger, more detailed photograph of them), from left to right, are those of: Valkendorf, Argent a rose gules between three wings [in annulo one and two? in triangle inverted?] sable; (possibly) Friis, Argent three squirrels sejant erect sable cracking nuts proper; Lindenov (canting arms), Per pale: Gules a linden tree palewise issuant from the line of division or; and Barry of four gules and argent; and [Unidentified], Argent three roses sable.
My surmise is that these four coats of arms are: Erick (from his father Henning Valkendorf), Erick’s mother, Berete’s father, and Berete’s mother.

Erik Valkendorf (ca. 1523–1605) was a Danish nobleman. He was the son of Councilor Henning Valkendorf to Glorup (d. 1535). In the years 1549 and 1559 he is mentioned as a courtier, and from 1553 he was a chamberlain to King Christian III and as such present at his deathbed at Koldinghus. In 1553 he got Hardanger and Halsnø monastery and in 1555 Højstrup a mortgage on the crown. He lived in Højstrup, and kept the mortgage unredeemed for the rest of his life. His wife Berete Andersdatter Lindenov died in 1568 at Højstrup in childbirth.

And how great a display of family heraldry is all that?
Posted by David B. Appleton at 2:00 AM