Heraldry, or a Quasi-Heraldic Corporate Logo?


Today's pictures are brought to you by the question: "Is it heraldry, or is it just a logo?"

It turns out, the dividing line between the two can be a little fuzzy. For example: 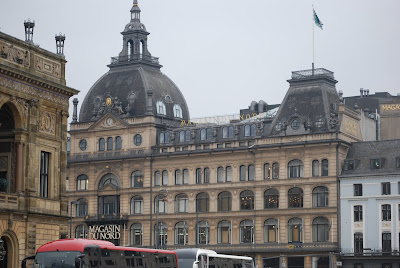 This is the flagship store of the Th. Wessel & Vett, Magasin Du Nord chain of department stores, located on Kongens Nytorv in Copenhagen. I have included this wide view photo to help give you an idea of scale.

The company is a subsidiary of the British department store retailer Debenhams, and traces its roots back to 1868 when Theodor Wessel and Emil Vett opened a draper's shop in Aarhus.

In front of the large dome on the left, we see this: 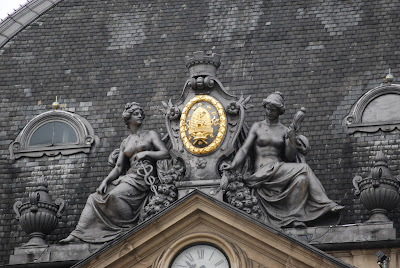 (As always, please feel free to click on an image to see a larger, more detailed photograph.)
The main charge on the cartouche surrounded by the rococco frame is, as you can see, a beehive beset with bees in front of a caduceus and a trident in saltire, the place where they cross surmounted by the winged helmet of Mercury. And we have  two (non-supporting) supporters, a woman resting her hand on a caduceus and another with a drop spindle and distaff spinning yarn,
The beehive beset with bees is seen elsewhere in Copenhagen: 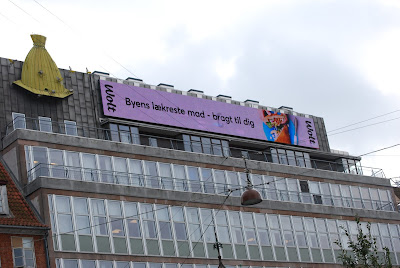 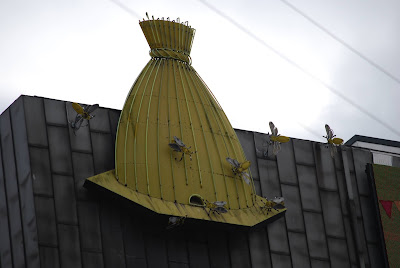 Here, though, the beehive is not displayed on a cartouche (thus making it more akin to an heraldic badge), and lacks the caduceus, trident, and winged helmet of Mercury, as well as the two supporters. It also, as you can see, can be lit up at night in yellow neon.
So we come back to the question we asked first above: "Is it heraldry, or is it just a logo?"
I think that we can answer this in two different ways:
The first is a simple declarative: "Yes."
The second is to answer with another question: "Why not both?"
It may not be a coat of arms, but given its appearance both on a shield and without a shield, it certainly seems to fill the function of what we loosely describe as "heraldry".
Posted by David B. Appleton at 2:00 AM