Boy, Did I Blow _That_ Question!


So there I was, already somewhat intimidated by the names of several of the people attending my on-line presentation to the Oxford University Heraldry Society last Thursday (May 6, 2021). (The topic was "Heraldry, History, and Mayflower Connections".) And it is a bit intimidating, when you've prepared a lecture to a group of people you expect mostly to be of university student age, and then find out that a number of the people attending are long-standing members of the Heraldry Society (and I mean, even longer-standing than me!), or another who is a herald at the Court of the Lord Lyon King of Arms in Scotland and who has probably forgotten more heraldry than I will ever know! So that was the audience to whom I had to present.
Nonetheless, I put on my "game face" and carried forward.
And it seemed to be going pretty well. Though I do still have an unfortunate habit of my speech speeding up as I go along, especially if I can't see the faces of the people I am talking to (you know, like in a Zoom meeting when I am sharing my screen), and I need to work on that some more!
But everyone seemed to enjoy it, and there were a number of good questions at the end. And then someone asked a question that was from a direction I hadn't expected, and it threw me off more than a bit.
The question? "What do you do with your coat of arms?"
Now, I will admit that I should have been better prepared to answer a question like this. But I wasn't. So my poor reply was that I mostly used my arms on my personal business cards, like this one: 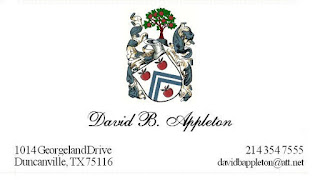 But that was the sole extent of my answer, which is a shame, because in fact I have done, and do, a lot more with my arms that merely that.
I mean, for one thing, I have a library painting of my arms created by a friend of mine on the wall of my office: 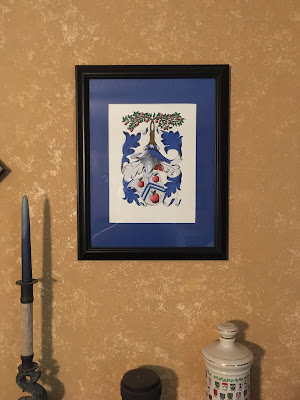 I have made a table banner of my arms for the (admittedly fairly rare as of late) times I attend a formal dinner: 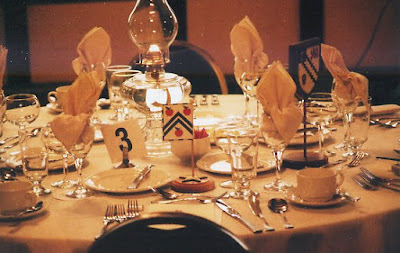 I recently had a blank notebook made with my arms printed on the cover (thus helping to make sure it gets returned to me if I accidentally leave it laying around somewhere): 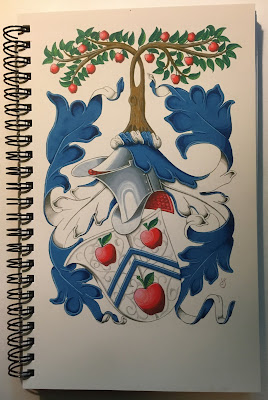 And over the years, I have created a number of bookplates (usually by modifying heraldic clipart which I have bought to show my arms and crest) to go into some of my (and especially my older) heraldry books (some of which already have bookplates in them from one or more previous owners): 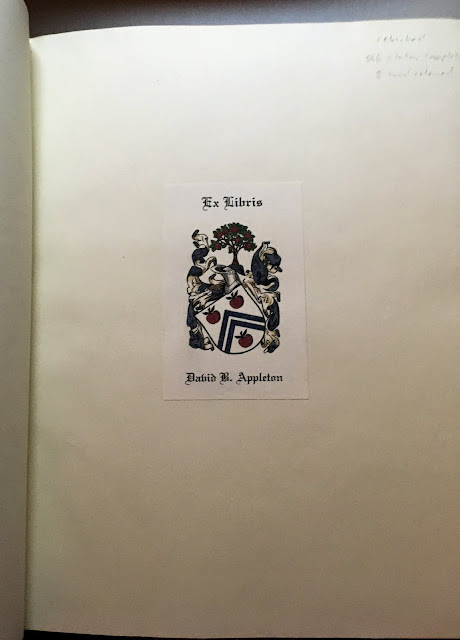 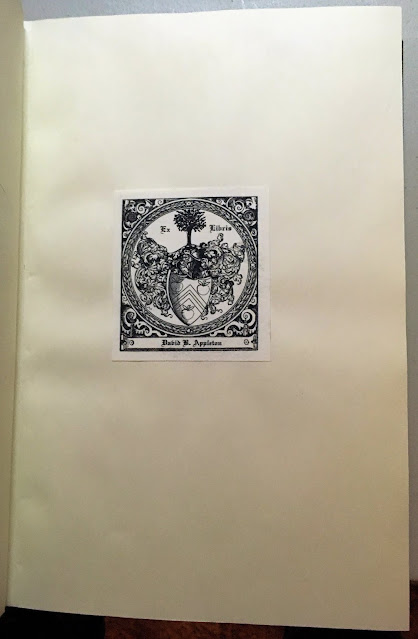 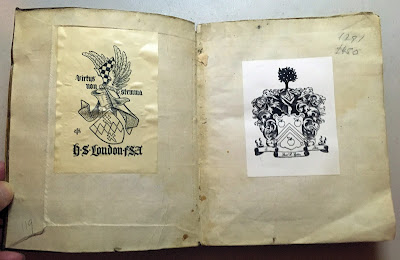 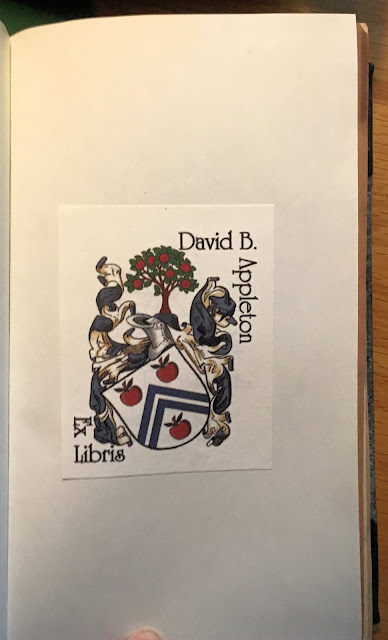 I could have said any and all of those things in response to the question "What do you do with your coat of arms?"
But I didn't. To use an American baseball expression, "I whiffed it." I only mentioned the business cards, when I could have added all these other things that I do and have done with my arms.
Heck, I even had the armorial notebook sitting right next to the desk I was speaking from. It was right there where I could have seen it if I'd just turned my head!
So I've been kicking myself for the past several days, and felt I needed to reach out to say, "I'm sorry! These are the things that I do with my arms, even though I live in a country with comparatively fewer opportunities to display such a thing. I am proud to be able to use my arms in these ways, and I look forward to making yet more ways to use them."
Still not brave enough to get them tattooed onto myself yet, though.
Posted by David B. Appleton at 2:00 AM