Stall Plates of the XXIII Chapter of the Order of the Golden Fleece, 1559, Part 3


Continuing with our review of the heraldic stall plates of the XXIII Chapter of the Order of the Golden Fleece held in 1559 in St. Bavo's Cathedral in Ghent, Belgium, we have the following, from left to right: 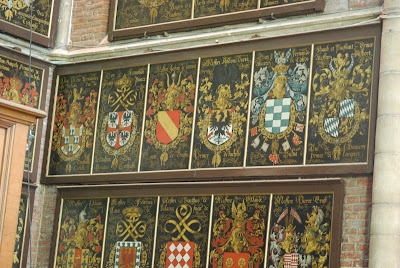 As always, I recommend clicking on an image to see a larger and thus more detailed photograph.
Pedro Fernandez de Velasco, 3rd Duke of Frias (1485-1559): Checky of nine or and per fess nebuly argent and azure, a bordure compony gules and argent charged alternately with towers or and lions rampant purpure crowned or.

Andrea Doria, 1st Prince of Melfi (1466-1560): Per fess or and argent an eagle displayed sable between four ragged staffs in saltire gules.

Fernando Alvarez de Toledo, 3rd Duke of Alva (1508-1582): Checky of fifteen argent and azure. (This could also be blazoned: Argent two bars azure a pale counterchanged, though I think that blazon is a little less elegant.)
Albert V, Duke of Bavaria (1528-1579): Quarterly: 1 and 4, Sable a lion rampant or; 2 and 3, Lozengy bendwise azure and argent.
In the row of plates immediately below that one, we have, from left to right: 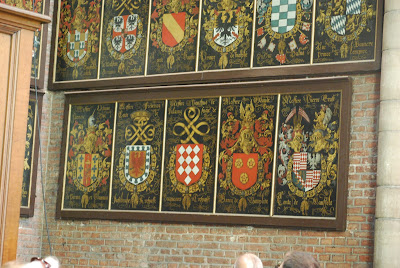 Ottavio Farnese, Duke of Parma (1524-1586): Or on a pale gules between six fleurs-de-lis azure an ombrellino or surmounted by a pair of keys in saltire or and argent. We have seen a slightly later iteration of the Farnese arms in the person of Alexander Farnese (1545-1592), Duke of Parma, who was the son of Ottavio here, in a stained glass window in the Cathedral of Our Lady in Antwerp.

Friedrich von Fürstenberg (1496-1559): Or an eagle displayed gules a bordure per bordure nebuly argent and azure. 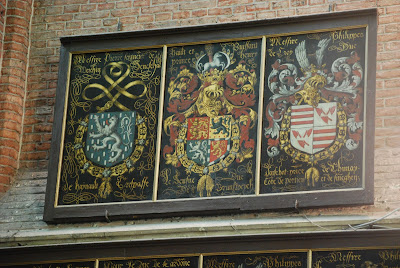 Henry II, Duke of Brunswick-Wolfenbüttel (1489-1568): Quarterly: 1, Gules two lions passant guardant in pale or; 2, Or semy of hearts gules a lion rampant azure (sable?); 3, Azure a lion rampant argent crowned armed and langued or; and 4, Gules a lion rampant or a bordure compony azure and argent.
Philippe de Croy, 3rd Duc d'Aerschot (1521-1595): Quarterly: 1 and 4, Argent three bars gules; 2 and 3, Argent three axes the two in chief addorsed gules. We have seen these arms earlier among the stall plates of the Knights of the Order of the Golden Fleece in the Chapter held in 1445, in the persons of Antoine de Croy and Jehan de Croy.
That's all for this time! Isn't it enough? No? Well, we've got one more post with the remainder of these stall plates for you. Stay tuned!
Posted by David B. Appleton at 2:00 AM