Stall Plates of the XXIII Chapter of the Order of the Golden Fleece, 1559, Part 1 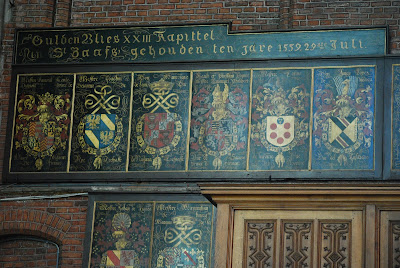 On this set of shields, we have, from left to right (you can click on the image to see a larger, more detailed picture. Please feel free to do this with this or any of the other photographs here):
Lamoral d'Egmont, Prince de Gavre (1522-1568): Quarterly: 1 and 4, Per pale, Chevronny or and gules, and Argent two bars embattled counterembattled gules; 2 and 3, Per pale sable and or, two lions combatant counterchanged, overall an inescutcheon Quarterly: i and iv, Argent a lion rampant sable; ii and iii, Gules a mullet of eight points argent.

Emmanuel Philibert, Prince of Piedmont (later Duke of Savoy) (1528-1580); Quarterly: 1 and 4, Per pale, Gules a horse rampant contourny argent, and Barry sable and or a crancelin throughout vert, On a point pointed argent three crampets gules; 2, Argent billety a lion rampant sable; 3, Sable a lion rampant argent; overall an inescutcheon Gules a cross argent.  (Crampets, Fr. bouterolles, are the decorative metal pieces on the tip of a sword scabbard.)

Cosimo I de' Medici, Duke of Florence (later the first Grand Duke of Tuscany) (1519-1574): Or six torteaux one two two and one, the chiefmost azure three fleurs-de-lis or.

Iñigo Lopez de Mendoza, 4th Duke of l'Infantado (1503-1566): Per saltire: chief and base, Sable on a bend or a bendlet gules; dexter and sinister, Or, the words Ave Maria to dexter and Gratia Plena to sinister. 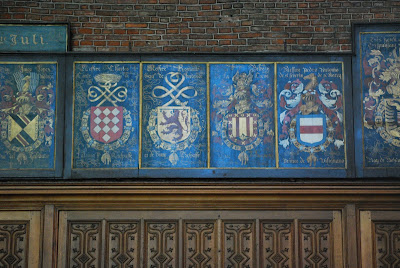 From left to right again, we have:

Beltran II de la Cueva y Toledo, 3rd Duke of Albuquerque (1477-1560) (his name and titles in full in Spanish: Don Beltrán de la Cueva y Álvarez de Toledo, tercer duque de Alburquerque, tercer conde de Ledesma, tercer conde de Huelma, señor de los estados de Cuéllar, la Codesera, Mombeltrán y Pedro Bernardo. Yes, it's quite a mouthful. I'm grateful that I'm not the one who had to announce him into a royal court!): Or two pallets gules on a point pointed ployé sable a dragon [wyvern] statant or all within a bordure gules charged with alternating saltorels couped or and escutcheons of the arms of Mendoza (Per saltire: chief and base, Sable on a bend or a bendlet gules; dexter and sinister, Or, the words Ave Maria to dexter and Gratia Plena to sinister). 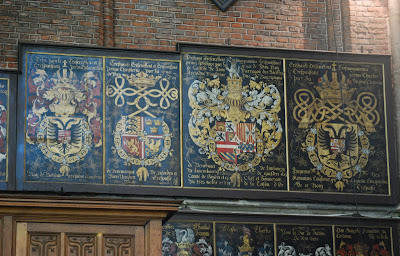 And for our final entry in this post, again, from left to right:
Maximilian, King of Bohemia, Archduke of Austria (later Holy Roman Emperor Maximilian II) (1527-1576): Or a double-headed eagle displayed sable, on its breast an inescutcheon: Quarterly: 1, Barry argent and gules; 2, Gules a lion rampant argent; 3, Per pale, Gules a fess argent, and Or two bendlets azure within a bordure gules; and 4, Quarterly: i and iv, Gules a tower or; ii and iii, Argent a lion rampant (azure? sable? it's hard to tell here).

Christian II, King of Denmark, Norway, and Sweden (1481-1559): Quarterly: 1, Or semy of hearts gules three lions passant in pale azure; 2, Azure three crowns or; 3, Gules a lion rampant crowned holding an axe or bladed argent; 4, Azure a wyvern or; on a cross throughout gules a cross throughout argent; Overall an inescutcheon: Quarterly: i and iv, Or two lions passant in pale (azure?); ii, Azure three (I don't know) argent; iii, Azure a swan argent crowned and legged or; overall an inescutcheon Or two bars gules. (Whew! If you think I'm going to continue to blazon every shield this complex among these stall plates, you need to start paying me more!)

Philip of Austria, Prince of Asturias (Charles V's eldest son, at the time of this Chapter Philip II of Spain, and Grand Master of the Order from 1555) (1527-1598): In dexter chief: Spain (Castile and Leon); in sinister chief: Aragon and the Two Sicilies, and all across the base of the shield, Burgundy.
Charles V, Holy Roman Emperor (1500-1558): the same as Philip, above, only that shield placed on the breast of the imperial eagle (Or a double-headed eagle displayed sable).
I'm hoping for some less complex arms in the next installment of these stall plates!
Posted by David B. Appleton at 2:00 AM